By Desmond Cudjoe The Minerals Commission has closed down the operations of MAXAM following the January 18, 2022, explosion at...
Read more

The Black Stars will face the Super Eagles of Nigeria as both sides battle for a spot at the...
Read more

Flagbearer of the National Democratic Congress (NDC), John Mahama, has expressed concern about the culture of impunity that has been on the rise since President Akufo-Addo, took office.

He said even before becoming President, Nana Akufo-Addo engaged in tendencies that deliberately raised the political temperature.

Addressing the Chiefs and people of Nkrankwanta as part of his three-day tour of the Bono Region, Mr. Mahama noted that the culture of impunity being glorified by the Akufo-Addo administration has resulted in creating fear and panic among the people.

He recounted some of the violent acts perpetuated by the New Patriotic Party (NPP) vigilante group as the attack on a national security officer in Kumasi and the subsequent vandalism perpetrated on a court of law in Kumasi and setting suspects free.

Mr. Mahama, also recalled the violence and intimidation unleashed by pro-government vigilante groups on NDC supporters during the Ayawaso-West-Wuogon by-election and recently the attack on some NDC supporters at Nkrankwanta during the nationwide voter’s registration exercise which has left one of the victims paralyzed. 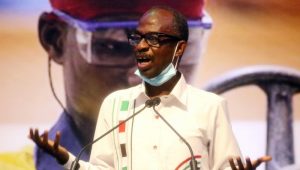 General Secretary of the NDC, Johnson Asiedu Nketiah, also condemned the culture of impunity, adding the next NDC government will implement programmes and policies geared towards modern policing methods.

By Desmond Cudjoe The Minerals Commission has closed down the operations of MAXAM following the January 18, 2022, explosion at Appiate in the Prestea-Huni Municipality...
Read more
Sport

The Black Stars will face the Super Eagles of Nigeria as both sides battle for a spot at the 2022 FIFA World Cup scheduled...
Read more
Sport

Wassa Association of Communities Affected by Mining, WACAM, and the Center for Environmental Impact Analysis have reiterated their call on all mining companies to...
Read more

By Benedicta Konadu The National Patriotic Party's National Women's Organizer Hopeful, Ellen Ama Daaku, has attributed the cause of the accident at Appiatse to ''sheer...
Read more

Former Speaker of Parliament, Professor Aaron Michael Oquaye, has refuted allegations that he was given military protection while he was Speaker of the 7th...
Read more

By Bubu Klinogo The Minority in Parliament says it is saddened and strongly denounces the withdrawal of the military detail attached to the office of...
Read more

Source: Graphic Online The Ministry of National Security has explained that the Speaker of Parliament, Mr Alban S.K. Bagbin still has security protection and that...
Read more