By Michael Kofi Kenetey The Eastern Regional Chapter of the National Graduate Teachers, NAGRAT has made a complaint to government...
Read more

Francis Edzornahttp://www.gbcghanaonline.com
The Speaker of Parliament, Alban S. K. Bagbin, has called for a new leadership that can effectively deal with the threat of neo-colonialism on the African continent.
He observed, 60 years after the continent was liberated from colonial rule, Africa remains at the mercy of the super-powers of the world, some of whose activities pose a serious challenge to growth and development on the continent.
The Speaker of Parliament made the call when a special Zimbabwean Envoy led by Ambassador Albert Chimbindi paid a courtesy call on him in Parliament. 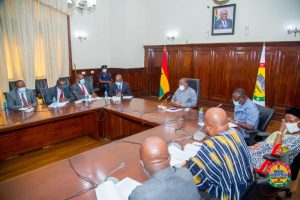 Ambassador Chimbindi and his delegation were in Parliament to officially solicit Ghana’s support for the bid of Chief Fortune Charumbira, to lead the Pan-African Parliament (PAP) as its next President following the exit of Algeria’s Bouras Djamel, whose tenure ended in March this year.
The Pan-African Parliament (PAP) has scheduled a meeting from May 21 – June 4 in Midrand, South Africa, where it will among other things consider the election and review of its leadership and other structures, including Permanent Committees and regional and thematic caucuses.
Speaker Bagbin commended the Special Envoy for choosing Ghana as the first point of call and pledged to work to deepen the diplomatic relations between Ghana and Zimbabwe.
For his part, Ambassador Cimbindi expressed gratitude to the Speaker and the Parliament of Ghana for the assurances given to the country’s bid.
He also pledged his commitment to building on new areas of cooperation between the two countries.

The Pan-African Parliament (PAP) was set up to ensure the full participation of African peoples in the economic development and integration of the continent.

The PAP is intended as a platform for people from all African states to be involved in discussions and decision-making on the problems and challenges facing the continent. The Parliament sits in Midrand, South Africa.

Rather than being elected directly by the people, PAP members are designated by the legislatures of their Member State and members of their domestic legislatures. The ultimate aim is for the Parliament to be an institution with full legislative powers, whose members are elected by universal suffrage. Until such time, the PAP has consultative, advisory and budgetary oversight powers within the AU. 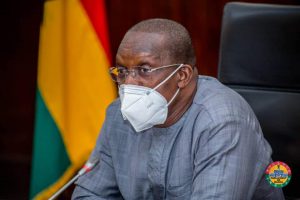 The AU Assembly adopted the Protocol to the Constitutive Act of the African Union Relating to the Pan-African Parliament during its June 2014 Summit. The new Protocol will come into force 30 days after the deposit of instruments of ratification by a simple majority of AU Member States.

As of September 2017, 15 Member States had signed the Protocol and five had deposited their instruments of ratification. The 2014 Protocol includes that the Parliament shall be the legislative organ of the AU, with the AU Assembly determining the subjects/areas on which the Parliament may propose draft model laws and for the Parliament to make its own proposals on the subjects/areas on which it may submit or recommend draft model laws to the Assembly for its consideration and approval.

By Michael Kofi Kenetey The Eastern Regional Chapter of the National Graduate Teachers, NAGRAT has made a complaint to government...
Read more
Commentary

Ms Josephine Oppong-Yeboah is a media personality and gender advocate. She believes that the best every community could do to their return migrants was...
Read more

By: Caleb Agyekum Aidoo As part of efforts to ensure the affordability of electricity tariffs in the West African Sub Region, the ECOWAS Regional Electricity...
Read more

Nigeria’s Medical and Dental Council says it will not recognise degrees from Ukrainian universities obtained since the start of the country’s war with Russia. The...
Read more