The Supreme Court has dismissed an interlocutory application filed by Tsatsu Tsikata, counsel for the petitioner in the 2020 Presidential Election Petition, seeking answers from the EC Boss on issues pertaining to the mode of transmission of election results.

Dismissing the application, the Court noted that the interlocutory application was discretional and must also raise relevance.

According to the Court, the application must be relevant and related to the issues between the parties.

“In this case, relevance has not been raised in the application,” the Court held at the pretrial on Tuesday.

The matter has been, meanwhile, adjourned to Wednesday, January 20 for counsels in the matter to file the issues for trial.

The petition, filed by the National Democratic Congress’ candidate, Mr John Dramani Mahama, is challenging the Electoral Commission’s declaration of the New Patriotic Party’s Nana Addo Dankwa Akufo-Addo as winner of the election, held on December 7, 2020.

The interlocutory application was seeking answers to 12 questions, including whether or not the National Communications Authority was involved in the transmission of the results.

It also wanted to know when the EC Chairperson, Mrs Jean Adukwei Mensa, realised that there were errors in the Presidential Election results.

Mr Tsikata contended that the answers to these questions would narrow down the issues set out for the trial.

However, Mr Justine Amenuvor, counsel for the EC, opposed the grant of leave for the motion for the interlocutory application.

According to the counsel for the EC, all the answers being sought by the Petitioner had been captured under the law and the EC duly followed the law in the transmission of the Presidential Election results.

He informed the Court that the transmission of election results was done through fax and that the Petitioner’s agents signed 13 of the 16 forms from the various regional collation centres, while the agents of the then President-elect also signed 14 of them.

According to counsel for the EC, the questions by the Petitioner sought to introduce new facts through the back door.

He said the answers being sought were well known and in his domain.

The seven-member panel, presided over by the Chief Justice, Kwasi Anin Yeboah, dismissed the application during the pretrial.

Mr Mahama is petitioning the apex Court to direct the EC to conduct a second election between himself, as the candidate of the National Democratic Congress, and the New Patriotic Party’s Nana Addo Dankwa Akufo-Addo.

He blames the EC for declaring Candidate Akufo-Addo Addo as victorious, while according to him, no candidate had the requisite 50 percent plus one vote of the total valid votes cast, thus necessitating a runoff of the two leading contestants.

Meanwhile, sitting has been adjourned to tomorrow, Wednesday, January 20. 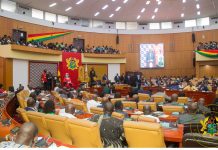