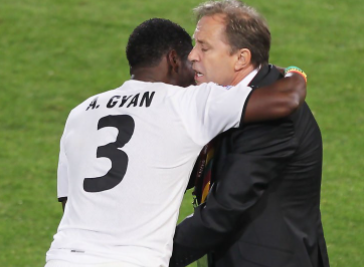 The Serbian tactician disclosed the current team of the Black Stars can’t be compared to the team he coached in his first stint with Ghana.

Rajevac said he does not have the same team as he did in 2010.

The coach made this known at the press conference in Garoua ahead of Ghana’s last Group C game with Comoros.

“We don’t have the same team like 2010. Not enough time for preparations. “We don’t have a player like ASAMOAH GYAN3.” Milovan Rajevac said.

The 67-year-old is struggling to put the team in a good performing shape ahead of progression in the ongoing African Cup of Nations (AFCON) in Cameroun.

He mentioned lack of enough time for preparations before the tournament.

The Black Stars have one point out of two matches after they were beaten 1-0 in their Group C opener against Morocco, before drawing 1-1 with Gabon in their second group game.

Ahead of a crucial encounter against Coromos, which could decide the fate of Ghana in the ongoing tournament.

Asamoah Gyan was part of coach Milovan Rajevac’s team who led Ghana to the 2010 World Cup quarter-finals during his first appointment with the Black Stars.

Milovan must win his final Group C game against Comoros on Tuesday, January 18, in a make or break contest at the Stade Romde Adjia at 7:00 pm local time.

Could Your Unconscious Body Language Be Sabotaging Your Dating Life?