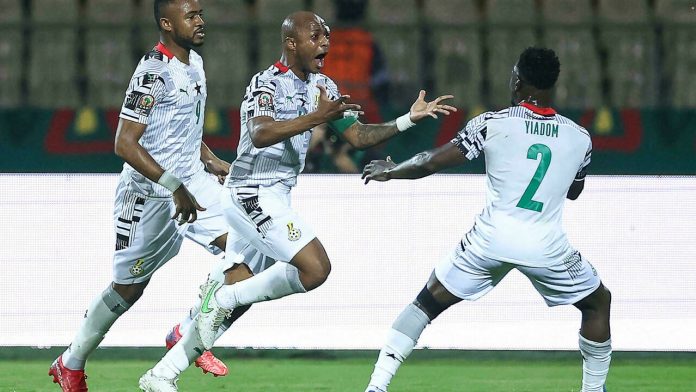 Story by Michael Okuley
The senior national team, Black Stars face Comoros in the final
group C game of the ongoing Africa cup of nations in Cameroon on
Tuesday.
Ghana, who had a shaky start to the tournament are searching for
her first win after losing to Morocco and drawing against Gabon
in their previous games.
Comoros are determined to end the tournament on a high with the
target of securing a win to upset the Black Stars.
Black Stars are unbeaten against Les Coelacantes in their last
2 meetings and are hoping to rely on their dominance to grab a
win to possibly become one of the 3rd best 4 teams to advance to
the round 16 stages.
Four countries are expected to progress as 3rd best-placed teams
in addition to the top 2 teams from each group.
Meanwhile, Malian referee Boubou Traore has been selected to
officiate the game. The 36-year old man would be assisted on the
lines by Issa Yaya from Chad and Mahamadou Yahaya Gado of Niger
with Issa SY from Senegal performing the fourth official role.
In the other games, leaders, Morocco will play against Gabon
Camp News
*Abagna Sanda is unavailable for selection
due to injury.
* Mubarak Wakasu makes himself available for selection after
joining his teammates at training on Monday evening.
* Benjamin Tetteh is serving a suspension after picking a red card
against Gabon.

More than 88,000 voters to exercise franchise in by-election