Head Coach of the Black Stars, Charles Akonnor has said Pyramids FC striker John Antwi deserves a call-up into the national team for next month’s international friendly against Mali.

The 28-year-old has had rear game time with the Black Stars despite his prolific goal scoring prowess in the Egyptian league.

Akonnor unearthed him during his stint with second-tier side Eleven Wise in 2011.

In an interview on Friday, Akonnor said Antwi deserves a chance in the team adding that “John Antwi, Odartey and I unearthed him at Eleven Wise and since then, he has done well for himself.

“I am looking at consistency with the team and now I think he has proven beyond doubt he is good, scored over 100 goals, now I think 102.

“All these new guys have the chance; we want people who can help us improve and also win the AFCON,” he noted. 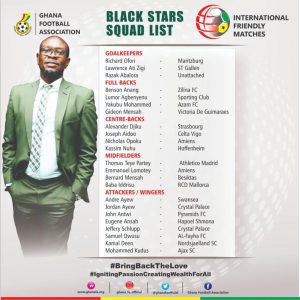 Raphael Dwamena career has suffered another major setback after his Danish Superligaen side Vejle Boldklub terminated his contract due to a recent heart problem. The...
Read more

Decathlon Ghana Limited has been unveiled as the official retail partner of the Ghana Football Association (GFA), for a period of four years. Per the...
Read more

Ghana midfielder Thomas Partey has been named the best player during Arsenal's 2-1 win against Rapid Vienna in the UEFA Europa League on Tuesday...
Read more