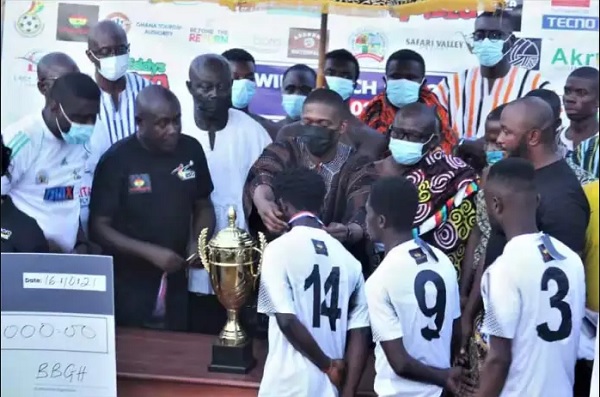 Asenema Community has been crowned champions of the maiden edition of the Odwira Beach Soccer Championship. The competition which was aimed at commemorating the annual festival attracted over 20 beach soccer clubs competing for honours.

The event brought a lot of dignitaries to the area and the tournament eventually marked the highlight of the Festival, with Nana Okuapemanhene Oseadeeyo Kwasi Akuffo III presenting the trophy to Asenema, who brushed aside Mampong on penalties after a 1-1 draw in regulation time.

Put together by the DCE of the Okere area, Kenneth Daniels and the Ghana Beach Soccer, he expressed excitement about the novelty and thanked the organizers for listing the area on the beach soccer map, promising to do more to help the youth to embrace the novelty, so as to promote developmental projects in the area.

At the end of the competition, Richard Osa won the Most Valuable Player, whilst Gideon Adjei grabbed the best goalkeeper of the tournament award. Alexander Adjei capped the tournament with the top scorer award for scoring 7 goals in the entire competition.

Hundreds of people visited the area during the two-day event which was hosted near the Asenema Waterfalls. It indeed attracted tourists and sightseers to the local communities.

Apart from the glittering trophy, the winners were also rewarded with a cash prize of GHS 5,000 and GHS 3,000 went to runners up, Mampong.