BOXING: Zab Judah pulled a gun on me in the gym before our fight — Joshua Clottey

By Bubu Klinogo The Minority and Majority sides in Parliament are holding separate Caucus meetings over the 2022 Budget Statement...
Read more

Former Welterweight Champion Joshua ‘grand master the hitter’ Clottey, shockingly revealed he almost got killed by American boxer Zab Judah in a confrontation in 2004 in Gleason’s Gym as he pulled a gun on him before their vacant IBF welterweight title fight.

Speaking on GTV Sports+ ‘NIGHT OF TOTAL BOXING’, the former IBF Welterweight Champion said he refused to succumb to the bully and arrogant posture of Judah when they met at the Gleason’s Gym in America where they both trained.

“What happened was that I had a fight and after the bout ended the commentator asked me that who do I want to fight next and quickly I said I want Zab Judah, I chose him because we both trained in the same gym, So in two days’ time I went to the gym to train and I saw him there I also saw a lot of cars parked around there too so I realized that there was going to be a problem and all of a sudden he just come straight to me and asked if I wanted to spare with him and  I said why do I have to spare with you I want a fight with you I want a real fight and beat you not sparing with you, then he got angry and asked why I was shouting on him and I asked again that, does he also want to come and control me here and to my surprise, he pulled a gun pointed at my face. I wanted to react but my trainer asked me to stop because those guys are dangerous and stubborn so we left and started training in the Bronx” he said.

Joshua Clottey, the Stance Orthodox later got the opportunity to fight Zab Judah after four years for the vacant IBF Welterweight title in 2008 where he won convincingly. 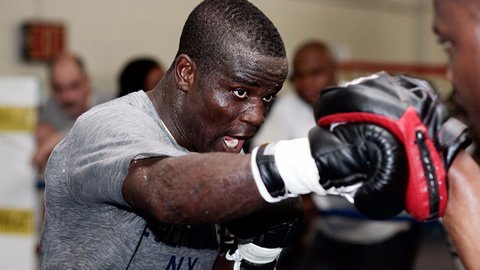 Judah began the busier fighter, showing quick hands and throwing effective combinations behind a jab. Clottey began steadily closing the distance between himself and his opponent from the third round, landing an increasing number of punches that took their toll on Judah. In round four, Clottey landed an uppercut that caused Judah to lose his balance, and by the end of the round, Judah had blood running down his nose. Judah staged a comeback in the sixth round as he landed a flurry of punches, but in the middle of the seventh round, Clottey landed a right hand that hurt Judah and caused him to back into a corner. In round nine, Judah suffered a cut over his right eye and the fight was stopped after he said he could not see. The referee had ruled the cut was caused by an accidental clash of heads even though replays clearly showed a punch by Clottey did the damage. The fight was then sent to the scorecards. Two judges scored the fight 86–85 and the other judge scored it 87–84, all in favor of Clottey.

Joshua Clottey (born October 6, 1977) is a Ghanaian former professional boxer who competed from 1995 to 2019, and held the IBF Welterweight title from 2008 to 2009. Born in Accra, Ghana, Clottey now lives in The Bronx, New York. At the peak of his career, he was notable for his exceptionally durable chin, and was never stopped in any of his five losses. His recent fight which he won was with opponent Azziz Mponda from Tanzania. Clottey won by TKO in round 8.

Make a Date with GTV Sports+ every Friday and Saturday at 9pm for the ‘NIGHT OF TOTAL BOXING.’

Story by Nathaniel Nartey Facebook: Nathaniel Nartey Twitter : @Annertey_Nartey Workers at the various Toll booths today went on a demonstration in protest against the abolishing of...
Read more
Politics

By Bubu Klinogo The Minority and Majority sides in Parliament are holding separate Caucus meetings over the 2022 Budget Statement that was unresolved by the...
Read more
General

By Nathaniel Nartey Facebook: Nathaniel Nartey Twitter : @Annertey_Nartey The Ghana Federation of Disability Organization says it is not convinced by a directive from the government to...
Read more
General

By Yvonne Asare- Offei A former Pathologist at the Korle-Bu Teaching Hospital who performed the Post-Mortem on the body of the late NPP Upper East...
Read more

By Godfred Zina The Chief Executive Officer, C.E.O of Hasaacas Ladies, Evelyn Nsiah Asare says selling some of the best players of her team to...
Read more

I don't charge when I feature on their song – Nacee

COVID-19 recovery rates not an excuse to be reckless – Information...

Ecuador appoint Jordi Cruyff as manager ahead of 2022 World Cup...