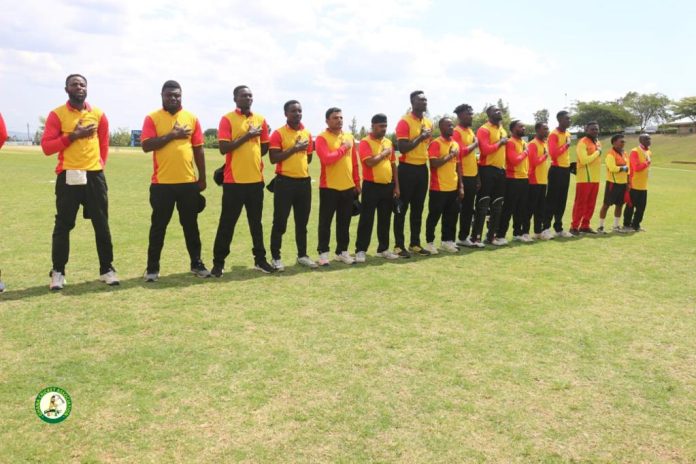 A five-wicket win over the hosts in the first game of the tournament was followed by a nine-wicket triumph over the Seychelles, before Sunday’s 116-run victory over Lesotho.

Rexford Bakum was the star on Sunday, spanking 66 from just 31 balls, before helping himself to five wickets.

Also on Sunday, the debutant Seychelles bagged an emotional win over Lesotho.

The landlocked nation notched 131 for eight batting first, with skipper Samir Patel scoring a breezy 35 not out, and Omar Hussain adding 33.

In reply, the islanders held their nerve superbly, as each of the top four made meaningful contributions to the chase. Ultimately, they reached the target with 22 balls to spare, sparking great celebrations.

Elsewhere, pre-tournament favourites Uganda are building up a nice head of steam, after comfortable wins over Malawi (ten wickets) and the hosts, Rwanda, who were handed a 106-run drubbing on Sunday.

Ronak Patel hammered 63 not out from just 37 balls, as Uganda reached 169 for four against Rwanda. Saud Islam had started the innings steadily, with a run-a-ball 43.

The chase never got going for the hosts, as they were blown away for just 63. Dinesh Nakrani did most of the damage, with three for 9.

Sunday also saw an entertaining clash between Malawi and Swaziland. The former was coming off a heavy loss to Uganda, while the latter had comfortably cruised past Lesotho in their respective opening games.

Batting first Swaziland were routed out for 97, thanks mainly to Moazzam Baig’s burst of five for 13.

The batters made quick work of the target, with Gift Kansonkho (32) and Samir Sohail (32 not out) playing freely, to seal victory after just 12.4 overs.

Tuesday’s action sees Ghana take on Malawi at Gahanga while Lesotho battle Uganda at IPRC in the morning. In the afternoon Seychelles take on Rwanda at

The winners of Group A and B in Rwanda this week will join Kenya and Nigeria in Africa Qualifier, where they will compete for a spot in the global qualifiers the blue-ribbon ICC event in Australia, in 2022.

2020/21 Ghana Premier League Second round kicks off on Friday

Earthquake of magnitude 6 strikes off Vanuatu in South Pacific –...

Astronomers may have discovered first moon outside Earth's Solar System