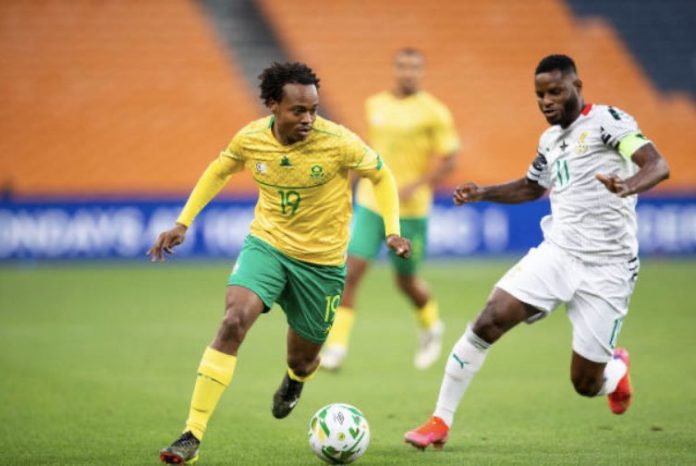 Ghana have qualified for the Nations Cup in Cameroon 2022 after a 1-1 draw in Johannesburg against South Africa.

Ajax star Mohammed Kudus’ early second-half strike was cancelled by Percy Tau as Ghana earned a vital draw to seal qualification with a game to spare.

Ghana began the game slowly and were nearly punished after a brilliant piece of play by the South Africans found Thapelo Morena on the right but his effort only found the side net.

Minutes later Sfiso Hlanti pulled out a great save from Ghana goalkeeper Razak Abalora with a ferocious left-foot strike.

Morena again had another chance after Brighton forward Percy Tau has taken on two defender before laying the pass to the right-back who fired wide.

Ghana’s only effort on target came after Emmanuel Gyasi took on a South African defender to roll the ball to Afriyie Acquah who fired directly to the goalkeeper.

South Africa were forced into an early change after Andile Jali got injured and was replaced by Ben Motshwari.

Ghana effected an early change in the second half with Osman Bulgaria replacing Kwame Opoku.

And just three minutes into the second half Ajax midfielder, who was Ghana’s liveliest player from the first half opened the scoring with a beautiful strike.

But the lead lasted only three minutes after Gamildien’s incisive pass found Percy Tau who slotted home cooly to level the scores.

The South Africans regained control, creating decent chances but it was the Ghanaians who had another fine opportunity as Baba Rahman found Acquah whose long strike slowly went wide.

Debutant Emmanuel Gyasi was then replaced by Emmanuel Boteng in the final minute.

The Black Stars held on to leave the FNB stadium with a draw.

Lawra: Immigration Service arrest over 300 as it bemoans porous nature...