GBC’s Sports Journalist, Benjamin Willie Graham, says his job as Team Announcer at the 2022 FIFA World Cup will require assisting other match officials with the correct pronunciation of names, especially players of the Black Stars.

He noted that mispronunciation of names of players and countries will be one of the things that the Qatar World Cup will seek to address.

“I think it has to do with the pronunciation of names of some countries and the difficulty we have.”

Opening up on his new appointment by FIFA as Team Announcer for the first time on the GBC Uniiq Breakfast Drive, Graham disclosed that he was nominated by the Ghana Football Association and had to go through a thorough selection process for the top job.

“The member Association, in this case, the Ghana Football Association, was contacted and I happened to be someone they nominated. When it happens, you have to go through a process to find out if indeed you are viable for that.”

Graham added that he will work with DJs and MCs of the tournament to create the right euphoria during all Ghana’s matches.

“There are DJs and MCs that you are going to work along side with, so what it means again is that as a team announcer, you are going to liaise with the DJs. So, for instance, when Ghana is playing and it’s the home game of Ghana, at the stadium, every song must be Ghanaian, so you are playing your country’s music, sort of, so you help the DJS select the songs.”

The Team Announcer job, which he said is the first in the history of the World Cup, is a move by the World Football federation to expand the tournament and bring some fun into the game, adding that his work will commence with the friendly match of Black Stars. 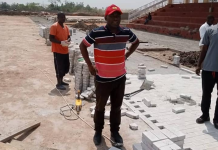