The former AC Milan and Real Madrid man has been subjected to a massive storm of criticism and abuse following his public comment on the explosive sensitive matter that has been trending in Ghana.

Earlier in the day, celebrities across the world, especially those with Ghanaian heritage including Idris Elba and Naomi Campbell were amongst 67 stars who voiced out their support for the growing LGBT community in Ghana.

Essien was left with no option but to delete his post that sought to offer unflinching support to the minority group as faceless individuals created clone accounts to attack one of Ghana’s greats and his family.

Rahim Sterling, Tammy Abraham, Didier Drogba and Kevin Prince Boateng have all had their fair share of abuse on social media with the pressure cranking up to companies to deal with abusers and delete accounts permanently. 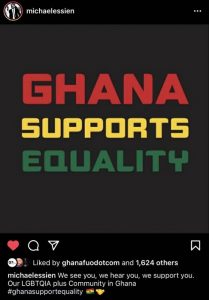 Homosexuality has become a forbidden topic in Ghana and the country’s president Nana Addo Dankwa Akufo-Addo who is a human right lawyer by profession has surprisingly declared he will not give support to the LGBT community.

He said: “It will not be under the presidency of Nana Addo Dankwa Akufo-Addo that same sex marriage will be legalized in Ghana, it will never happen in my time as president.

The Federation of International Football Association (FIFA) has instructed Hearts of Oak to pay Nigerien international Mamali Lawali $11,000 for breach of contract. This follows...
Read more

Caster Semenya says she will not attempt to qualify for the 200m at the Tokyo Olympics after defending her national 5,000m title in South...
Read more

World football governing body FIFA has approved the Project Team for the implantation of the Video Assistant Referee (VAR) in Ghana. The decision was announced...
Read more

Pupils of Gwira Ehyiam cry for maintenance of their school