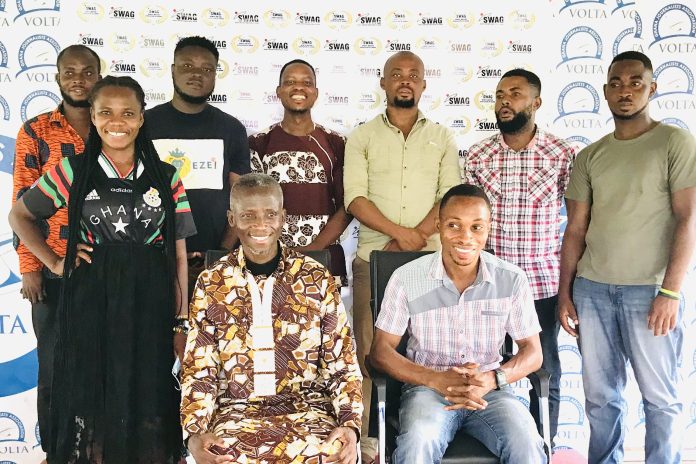 The Deputy Director of the National Sports Authority (NSA) in charge of Technical, Mr. Kwame Amponfi has met members of the Volta Regional Branch of the Sports Writers Association of Ghana (SWAG-Volta) in Ho, the Volta Regional capital.

The purpose of the meeting was to engage the sports media on matters of sports development in the region and to bid a formal farewell to the inky sports fraternity having served as the Volta Regional Director of the NSA for three and a half years.

Mr. Amponfi acknowledged the media as a critical stakeholder in sports development and promotion.

Head of the Authority’s Technical Unit confirmed that the media is a conduit that stimulates the interest of sporting activities.

“Because where the engagement will not be happening to stimulate the interest of the sports you would need the media to channel it there be it visual, print or whatever and that is why we cannot do without the media” Mr. Amponfi said.

He took the opportunity to outline few of his accomplishments, roles played, activities he embarked and observations while he was the regional boss.

Mr. Amponfi alluded to a conscious effort he took towards an intended step in projecting the region at the national level.

Mr. Amponfi insisted, that the Unit must be headed by Physical Education Professionals a decision which was met by stiff opposition yet accepted.

He described the regions’ capabilities as “Abundance of natural raw talents in a youthful populated region.”

His tenure as a director saw the region placing 3rd and 4th positions respectively in the 2019 National cross-country event.

The Deputy Director disclosed his confidence in the new Regional Director who is yet to be officially announced to media.

“The Director General of the Authority has posted to you again an equally capable Regional Director I have no doubt in the capacity of Mr. Sapei, I have no doubt still in the team there but like I did say sports administration is a team work if the media see their role that it will take us to support the authority to advance this course and progressive so that the agenda brand Volta will be protected at all times.” He said.

Savanna will soon catch-up with other regions- Prez Akufo-Addo

We’ll comply with IGP directives on use of fortified bullion vans...