THROWBACK: Our Starlets in 1995 made us Mohammed Ali in Football – Sam Brew-Butler

Former Chairman of Ghana Football Association (GFA) and majority shareholder of Ebusua Dwarfs, Nana Sam Brew-Butler, believes determination of the entire quad, the playing body, and the technical team made it easy for the team to clinch gold at the World Cup in Ecuador 1995.

He laid emphasis on the football system and technique adopted by the head coach of the side (late SAM ARDEY) which he describes the multi-system.

He disclosed this on GTV sports+ as he discussed happenings of FIFA U-17 World Cup tournament during GBC/GTV Sports+ Starlets 25th-anniversary celebration. 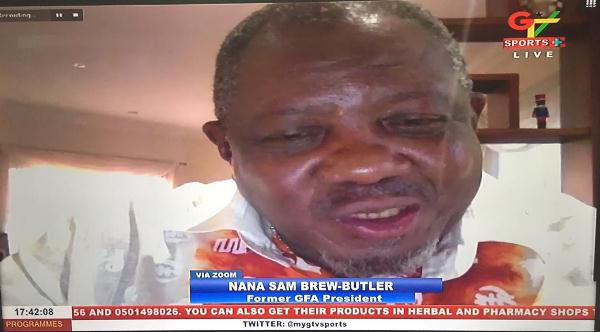 “Ghana, as we all know, is a great football nation and having followed them (starlets 95) from the beginning right through the preliminaries to the African stage and then progressing to the world stage, so the ultimate was to win the world cup and our message to them was to encourage them and tell them to take one match at a time,” he said on Sunday, August 16.

“They proved to us that they were capable and so all that we could do was to encourage them. It was fascinating when you read the reports that came out, it shows how difficult it was for opponents to read our style of play. You could not just read their system of play. Some say they were intercepting 442 to 451 and many others, in fact, they were the Mohammed Ali of our time in the football field,” he added.

ABOUT THE FORMER GFA PRESIDENT

Samuel Nana Brew-Butler is a distinguished Ghanaian entrepreneur and the original founder of Cenpower. He has held many senior management roles in his successful career, most notably Group Commercial Manager of Ghana Industrial Holding Corporation from 1981-1985. He then set up Reltub Company Limited, a business and project development group, of which he is Chairman and CEO. He is also a shareholder and Resident Director of Arab Contractors, an international construction company, and a Director of Consolidated Power Projects Ghana, a subsidiary of Consolidated Power Projects South Africa. He has a first degree in Business Studies from the University of North London (UK) and obtained a Post Graduate Diploma from the University of Kent at Canterbury (UK).

The Starlets won the tournament after beating Brazil 3-2 in the final to lift the trophy for the 2nd time in the history of the West African country, the goals were scored by Baba Sule (39’), Abu Iddrisu (45’) and Emmanuel Bentil (49’), Brazil’s equalizer came through Juan (47’) and Marco Antônio (90’).

BLACK STARLETS FULL SQUAD FOR THE 1995 FIFA U-17 WORLD CHAMPIONSHIP:

For more on the starlets 1995 squad and all the revelations, make a date every Sunday at 2 p.m., on ‘TIME WITH THE CAPTAINS’ show on GTV Sports +. The show is also live each day on ‘THE FILE’ on Mondays to Fridays 10:30 a.m. to midday.

GTV sports+ — the home of the legends!

By Nathaniel Nartey Facebook: Nathaniel Nartey Twitter: @Annertey_Nartey Stakeholders in the Petroleum and Transport industry have called for some levies to be scrapped, following another increase in...
Read more
World

Former US Secretary of State and retired four-star General, Colin Luther Powell has died of COVID-19 related complications. His family announced this in a...
Read more
Entertainment

By Michael Okuley. Twitter: @MikeOkuley Asenema Community has been crowned champions of the maiden edition of the Odwira Beach Soccer Championship. The competition which was aimed...
Read more

Story by Michael Okuley MTN has wrapped up their golfing calendar with the final of the series of the MTN 2021 Invitational Tournament. The colourful...
Read more