By Nathaniel Nartey Data from the State Insurance Company (SIC), has revealed that transit trade for the first quarter of...
Read more

Ms Josephine Oppong-Yeboah is a media personality and gender advocate. She believes that the best every community could do...
Read more

President Akufo-Addo has sent word to encourage Ghana’s own and reigning IBF Lightweight Champion, Richard Commey to win the title for Ghana ahead of the Champion’s fight against Teofimo Lopez.

Responding to a question asked by award-winning presenter, Patrick Osei Agyemang, popularly known as Countryman Songo on what he has to say to Richard Commey as he defends his IBF Lightweight title, President Akufo-Addo said: “win the title for Ghana”.

President Akufo-Addo said this when he engaged members of the press at the Banquet Hall of the Jubilee House in Accra today (December 13, 2019).

The encounter was to afford journalists the opportunity to ask the President some critical questions on topical issues in the country.

On Saturday (December 14, 2019) the IBF Lightweight Champion Richard Commey will put his title on the line in what could be an outstanding bout.

Commey will face Teofimo Lopez who makes his first attempt at becoming a world champion when he faces the Accra, Ghana native.

Commey, 32, says he will not relinquish his title easily. Lopez, 22, also says his stock will either go up dramatically after Saturday or it’ll drop to the point where he’s “irrelevant” in the eyes of boxing fans. 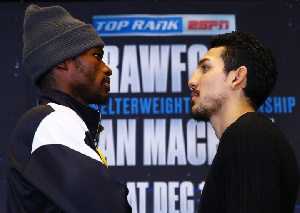 The fight comes off at Madison Square Garden in New York on Saturday night.

Ms Josephine Oppong-Yeboah is a media personality and gender advocate. She believes that the best every community could do to their return migrants was...
Read more
Politics

Story: Franklin ASARE-DONKOH Speaker of Ghana’s Parliament, Rt. Hon. Alban S.K. Bagbin, says Ghanaians must be at the centre of every decision made by the...
Read more
Education

Story by Akosua Adjei Organisers of the 2022 TotalEnergies Women’s Africa Cup of Nations have outdoored the official Mascot for the biennial event. The Mascot who...
Read more

Story by Michael Okuley The 2022 edition of the MTN Ashantifest Community Soccer tournament comes off this weekend at the Baba Yara Stadium in Kumasi....
Read more

Small Arms Commission to assign codes to firearms from October 1