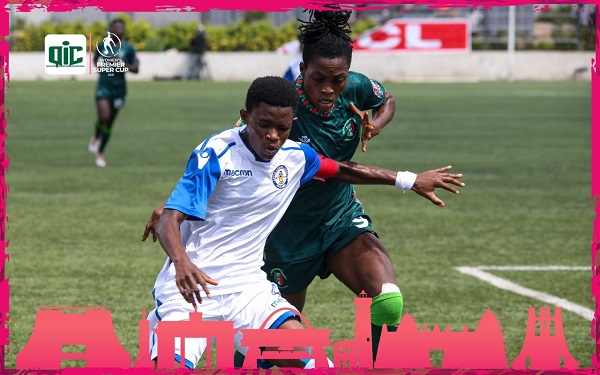 The Women’s Premier League Super Cup is a preseason tournament for the first 4 teams in each zone of the Ghana Women’s Premier League. While Ampem Darkoa, Ashtown Ladies, Prison Ladies and Kumasi Sports Academy represented the Northern Zone, Hasaacas Ladies, Ladystrikers, Soccer Intellectuals and Berry Ladies made up for the Southern zone.

Ahead of the maiden edition of the WPLSC, teams were grouped in 4 teams of 2 with Soccer Intellectuals, Ampem Darkoa, Prisons Ladies and Berry Ladies were drawn in Group A. Group B is made up of Hasaacas Ladies, Ladystrikers, Kumasi Sports Academy and Ashtown Ladies.

Meanwhile, the chairperson for the WPLSC committee Ayisha Ayison has applauded the team for the level of quality displayed on the pitch. According to her, I expect the level of competition to go higher but so far so good. The teams haven’t disappointed at all and the finals will be even better”.

The Madina Astro Turf will host Ampem Darkoa and Prisons Ladies at 3pm on Sunday before Hasaacas and Ladystrikers battle it out for the ultimate at the same venue at 6pm.