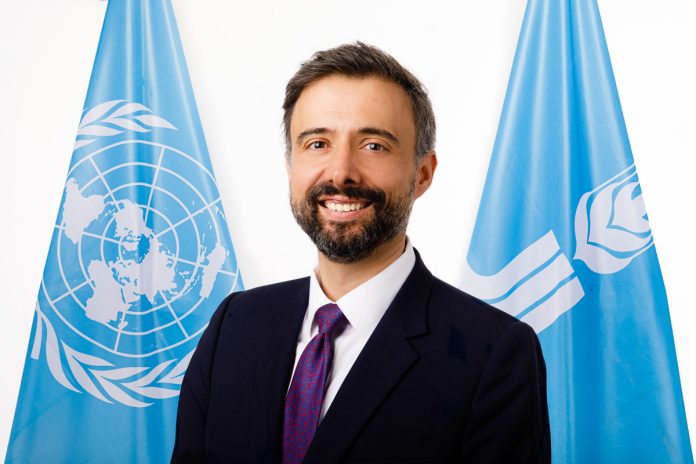 Development Finance expert, Alvaro Lario, is now the President of the UN’s International Fund for Agricultural Development, IFAD. He assumed office on the 1st of October, 2022. Top on his agenda is the battle against poverty and hunger among the world’s rural poor in the face of climate change and food insecurity.

Lario, a Spanish national, served as IFAD’s Chief Financial Officer from 2018 till he assumed the leadership position. He has led efforts to harness private sector investment to boost the resilience of millions of small-scale farmers and rural communities who are among those most affected by global shocks. “Our mission has never been more urgent as food insecurity, climate change and conflict threaten the lives and livelihoods of the world’s rural poor,” he said.

The new IFAD President remains committed to the organisation’s goal to double its impact on poor rural communities by 2030. This will be done in part by driving forward climate change adaptation as a priority for the Fund. In his words “We keep moving from crisis to crisis, focusing on immediate relief. But if we want to avoid winding up in the same place again five years from now, we need to invest in the medium term — and this means nothing less than the transformation of food systems, and adaptation to climate change.”

In an earlier interview at the AGRA summit in Rwanda ahead of taking office, Lario promised to improve the conditions of Africa’s smallholder farmers by improving their working conditions as well as lifting them out of poverty, with about $150 million funds raised from Swedish and Japanese Pension Funds. He said this has set the tone for a new form of investment to improve the lives of farmers across the continent.

Lario said there is also a programme in place to mobilise a $1billion private sector investment, which is a new trend, adding that, “this is happening because these investors want to join IFAD to improve the lives of smallholder farmers because they want to make a social impact.” He has acknowledged that it is private investors and the private sector that will help change the way smallholders are supported to grow.

He said IFAD was the first UN’s specialised agency to receive credit rating, and this is what helped the Fund to mobilise $150 million from the Swedish and Japanese Pension Funds. With this success, he said, IFAD wants to continue doing this to bring in the private sector to support the agendas of the smallholders. Lario said “IFAD has targeted at least 55 percent of its funding to be directed to the African continent,”, adding that, though the IFAD works in almost 100 countries and other global institutions, Africa continues to be a priority.

On the recent food crisis, he said this has shown that African countries can prevent food insecurity by boosting local production with locally grown crops to ensure local consumption which Lario said is very fundamental. In addition to this, there is also the need to have inter-regional trade to make food move from one country to the other. He said the Fund is also aware of post-harvest losses which have been estimated to cost the smallholder farmers across the continent between 20-30 percent from the time of

harvest till they get to the market. “These post-harvest losses are why the farmers’ incomes have been reducing. It is for this reason that we are working with Rwanda, where we launched a programme with them to bring the post-harvest losses down by 70 percent,” Lario said.

The IFAD President said the Fund has also taken note of the effect of Climate Change on the farmers and is putting in place programmes that will help them to adapt to climate shock. In addition, storage has also become a big problem and every effort is being put in place to find a solution to these problems. “What we are seeing is that the smallholder’s assets; the soil, the land and biodiversity are under threat and without these they also cannot even feed themselves. “Accordingly, IFAD has put together the biggest adaptation plans. The Smallholder Adaptation Programme, which started in 2014 is currently working to mobilise resources from the Climate Fund like the Green Climate Fund and other environmental facilities and expertise, because we have found that climate change is leading to many of these farmers falling into poverty,” Lario said.

On how the Fund is able to ensure that its resources go to the farmers who are beneficiaries Lario said, “one of the things we track carefully is how much the smallholder’s income grows between the time of IFAD’s intervention and after, to ensure we have really brought some changes to their lives. Another area that is also important to the Fund is whether the farmers get access to the market, in addition to how much they can withstand shocks after our intervention.”

The shift to mobilise funds from pension funds is part of Lario’s plans to bring in private investors and private sector finance to help fund IFAD’s projects. It is his experience in the private sector, academia, and international financial institutions, including his past position as Associate Vice-President, Chief financial officer and chief controller of the Financial Operations Department at IFAD, which is the driving force behind the new move.

Before joining the Fund in early 2018, Lario was the treasury capital markets lead and principal portfolio officer at the International Finance Corporation, an arm of the World Bank Group. Earlier positions

include various roles in the private sector asset management industry and in academia. He has a PhD in financial economics from Complutense University in his native Spain, and a master’s degree in finance from Princeton University.