ustice Ruth Bader Ginsburg, who died a week ago, has become the first woman in US history to lie in state at the US Capitol building in Washington DC.

The liberal icon died from pancreatic cancer after 27 years on the nation’s top court.

Thousands have been paying their respects as she lay in repose outside the Supreme Court building this week.

Ginsburg, who died aged 87, was an outspoken advocate for gender equality and civil rights.

She has been mythologised by liberals and feminists as a barrier-breaking leader. 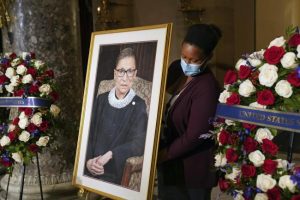 Dubbed by her fans as the Notorious RBG, she also became the first justice to have two days of viewing at the Supreme Court.

Given the sheer number of visitors coming to pay their respects, organisers determined one day would not be enough.

Makeshift memorials lined the court steps as the lines of those attending Ginsburg’s public viewings snaked around the National Mall. Her casket was kept outside the Supreme Court earlier this week to allow for outdoor visitation in light of Covid-19.

The formal ceremony – in which she is lying in state at the US Congress – is invite-only, also due to the pandemic. It is being attended by senior elected officials. Democratic presidential nominee Joe Biden and his wife are also present.

As her casket arrived in Congress on Friday, Speaker of the House Nancy Pelosi called it her “high honour” to welcome the late justice as the first US woman to lie in state there.

Rabbi Lauren Holtzblatt, who eulogised Ginsburg as she lay in state, recited a prayer in Hebrew – not often heard in the halls of Congress.

In addition to being the first woman, Ginsburg is also the first Jewish American to ever lie in state at the US Congress.

She will be buried next week in another private ceremony at Arlington National Cemetery.

Her death has sparked a row between President Trump’s Republicans, who wish to nominate a replacement, and opposition Democrats, who say whoever wins the 3 November election should have that right. Back in 2016, Republicans blocked then-President Barack Obama’s top court nominee, arguing that the decision should be made outside of an election year.

Naming justices to the nation’s top court is contentious as court is the final say in major issues. Recent rulings have included abortion rights, immigration, healthcare and same-sex marriage.

What does it mean to lie in state?

In short, lying in state is when the caskets of prominent government officials are displayed inside the US Capitol or other government buildings.

The first person given the honour was Henry Clay in 1852, a Kentucky Senator who died during his term. Since then, the 33 men who have lain in state at the US Capitol have all been high-profile statesmen, like President Abraham Lincoln, or military members.

Ginsburg is now the first woman and only the second justice from the top court to be given the honour. The first was William Howard Taft, who was also a US president.

Who else has lain in state?

Civil rights leader John Lewis, who served as the Democratic Congressman from Georgia until his death this July, was the last individual to lie in state.

Congressman Elijah Cummings in 2019 became the first African-American lawmaker to do so.

Another civil rights icon and African-American woman, Rosa Parks, received a similar tribute when she died in 2005. She lay in honour in the Capitol Rotunda – a different term for private citizens. 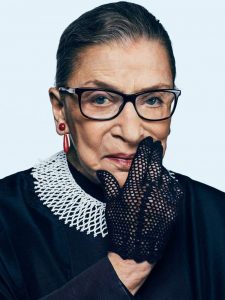 Who was Justice Ginsburg?

Ginsburg joined the Supreme Court in 1993, after her nomination by President Bill Clinton. She was the second woman ever confirmed to the bench.

Among Ginsburg’s most significant, early cases was United States v Virginia, which struck down the men-only admissions policy at the Virginia Military Institute.

During her 27-year tenure on the bench, she moved noticeably to the left, serving as a counterbalance to the increasingly conservative-leaning court.

She was known for her forceful – occasionally biting – dissents. Ginsburg did not shy away from criticising her colleagues’ opinions.

“Justice Ginsburg’s dissents were not cries of defeat. They were blueprints for the future,” Rabbi Holtzblatt said in her eulogy.

In 2015, Ginsburg sided with the majority on two landmark cases – both massive victories for American progressives. She was one of six justices to uphold a crucial component of the 2010 Affordable Care Act, commonly known as Obamacare. In the second, Obergefell v Hodges, she sided with the 5-4 majority, legalising same-sex marriage in all 50 states.

Italian town auctioning off abandoned homes for just over $1

An Italian town is looking to draw in new visitors by auctioning off abandoned houses with opening bids of $1.18. The town of Salemi, in...
Read more

The US Senate has confirmed Judge Amy Coney Barrett to the Supreme Court in a victory for President Donald Trump a week before the...
Read more

Britain’s Prince Harry said it took him years to realise that unconscious racial bias existed and his eyes had been opened by spending time...
Read more

Public comply with stay off beach directives on Easter Monday