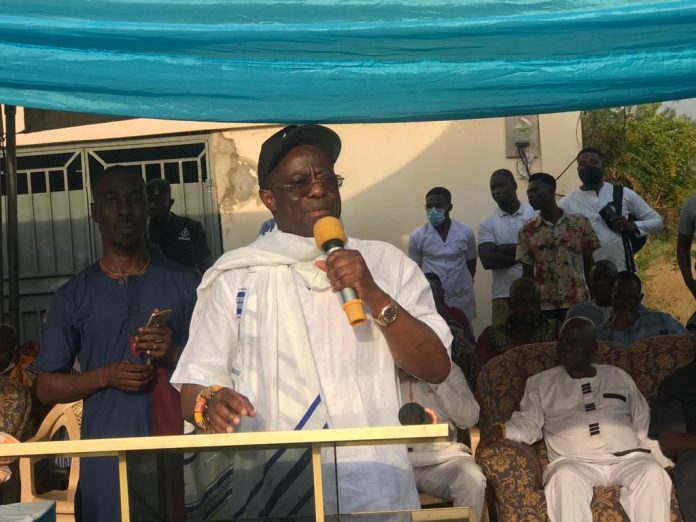 By Seraphine Nyuiemedi
The Chiefs and people of Fodome Hloma in the Hohoe Municipality of the Volta Region have marked their annual Dunenyo festival with a resolve to embark on more self-help projects in the Community.
The four-day event brought together citizens from far and near amidst pomp, float and a football gala.
Member of Parliament for Hohoe Constituency and Minister of Railway Development, John Peter Amewu who graced the occasion urged the people to support their traditional authorities to facilitate development.

The celebration which was instituted in 1990, led to the people of Hloma mobilizing funds and resources towards executing infrastructure and amenities to enhance the socio-economic livelihood of citizens.

Through the hard work, and dedication of the citizens, the Community can boast of a completed kindergarten classroom block, basic and Junior High School block, Electricity and a Community Library since the inception of the festival.
The 2022 celebration, which is the 32nd, was to mobilize funds towards a Community water project.
Member of Parliament for the Hohoe Constituency, John Peter Amewu said the government will make the Fodome Helu- Hohoe road a dual carriage road to open up the area. He said the Fodome Campus of the University of Health and Allied Sciences (UHAS) will also become an independent University.
He announced that a Technical and Vocational Education and Training (TVET) Institute will soon be established in the area. Mr. Amewu said the area will also benefit from the water expansion projects for Hohoe to enable them to have access to potable drinking water.
He urged the people of  Fodome to do away with their political affiliation and support a government that spearheads development.
An amount of GHC 10, 595.70 was realized in a fund raising towards the start of the Water Project.

KNUST crisis: Government to take a decision on the way forward