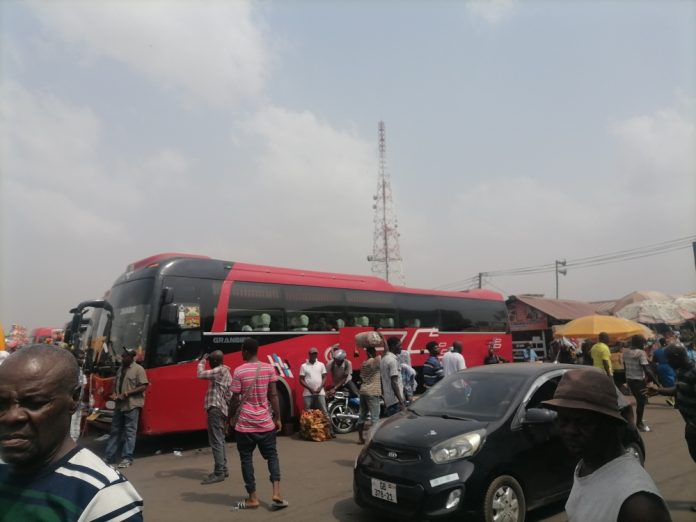 By Bernard Nti and Charity Opoku.

Reports from Kumasi have it that there has been a sharp decrease in patronage of transport terminals this Christmas period compared with the situation in recent years.

Checks by GBC News at selected popular terminals within the Kumasi Metropolis showed that, unlike previous years when commuters had to struggle for the limited vehicles available to make their journey, this time around, the transport operators were not only waiting for prospective passengers but complained about unusually slow business.

The popular bus terminals visited were the VIP/Neoplan Station, Intercity STC, among other Stations. At the Intercity STC terminal at Asafo as at about 2 pm ahead of the celebration, the place was virtually empty with only one bus on schedule waiting to be loaded. An official at the terminal who spoke on condition of anonymity noted that previously at the same time, STC would have already dispatched about 10 buses to Accra with many passengers still waiting for buses to arrive.

However, as at 2 pm, only five buses had fully loaded for Accra since dawn, adding that, business had been very slow. At the VIP and Neoplan Station which is one of the busiest terminals in the city, there were many buses being loaded with just a handful of commuters to patronize them. The union leaders expressed concern about the slow pace of business and noted that this year’s business has been bad compared with what happened at the same time last year.

At the Tarkwa Number Two Ford Station with schedules for Kumasi-Tarkwa-Bogoso in the Western region, the Station Master, J.B. Fosu, told GBCNews that at the same time last year, about 15 of their vehicles had already left with passengers for their respective destinations. However, as at 2.30 pm, only five cars had left and blamed the situation on different factors.

At the Asafo Rest Station that connects Kumasi to Accra, the situation was no different. A driver, Kofi Appiah, had similar complaints to share with GBC News.