This was in recognition of her long commitment to national development for over three decades.

“You are a proud daughter of the soil who is renowned for her principled stance on social justice and democratic governance and have used your profession for promoting same. 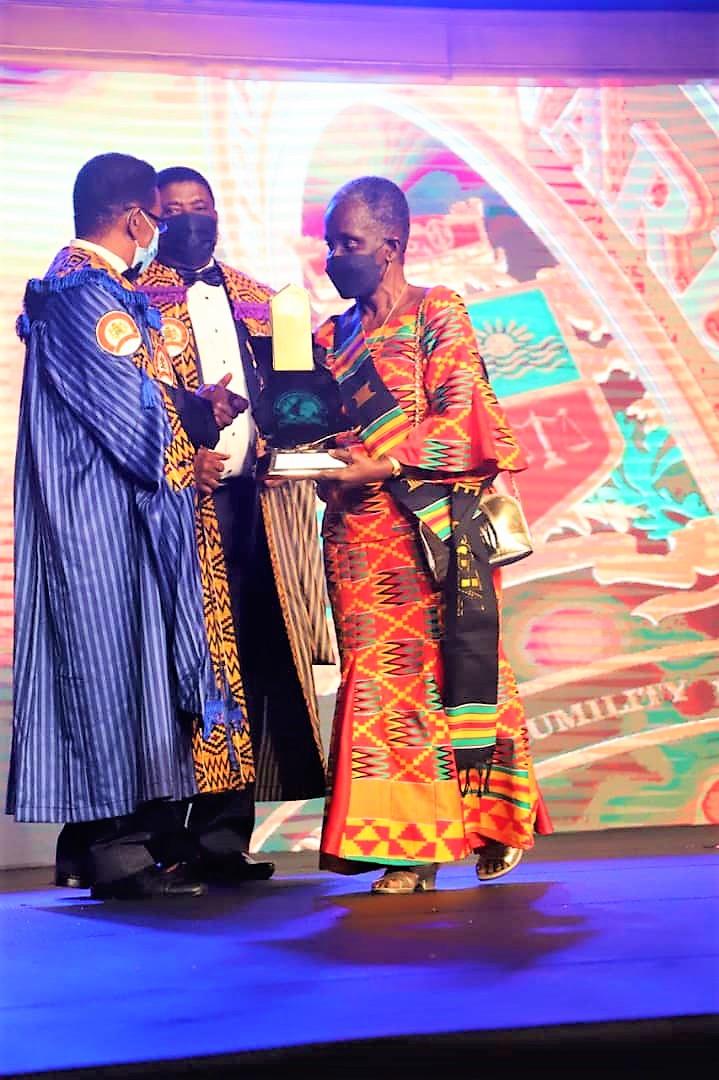 “You have lived most of your life standing against injustices and human rights abuses; a course you pursue as an author and columnist on different platforms,” a citation in her honour read.

The former GJA President was lauded for her display of courage on sensitive national issues, which the MEF said was a definition of class statesmanship and patriotism in nation-building.

“No wonder you won the one and only John Kogblenu Award for Valour from the GJA, and also given special mention in the 2004 National Reconciliation Commission Report for taking a bold stance in condemning the 1979 executions and other human rights violations,” the citation noted.

“As a journalist and author whose creative writings continue to excite both young and old minds alike on many social and democratic issues, you stand tall on our radar to receive this award,” the MEF observed.

The Awards, which is organized once every five years, is reserved for individuals and organizations with the highest positive impact on humanity rather than just personal achievements.

The MEF’s laureates are people who have enhanced the wellbeing of their community or nation in a significant way either in the course of their jobs or lives.

President Nana Addo Dankwa Akufo-Addo, in an address, lauded the award winners for their unwavering commitment to the pursuit of their goals.

“The Foundation understands that neither these glass mementos they take home today nor the panache of this event is commensurate with the honour the laureates deserve.

“But by recognizing them here today, we all ought to be reminded that no goal is beyond our reach if our determination to succeed is relentless,” the President stated.

He observed that Africans benefiting from their resources would require selfless leadership, peace, stability and the extrication of “our subjugated minds to stand up and reach for greater heights.”

President Akufo-Addo commended the event organizers for the noble cause, saying “true heroes live by example and put integrity before personal gain by doing the right thing when nobody is watching.”

Otumfuo Osei Tutu II, Asantehene, said the MEF with the advent of the Awards, was playing a positive role in promoting the quest for high achievements at all levels of the society.

“The Foundation is helping to inspire new generations to strive harder for excellence. That, without that, is worthy of every effort,” the king remarked.

The programme saw a cross-section of individuals of varied professional backgrounds receiving awards for distinguishing themselves in their fields of endeavour.

By: Nicholas Osei-Wusu A former Minister for Defence in the previous New Patriotic Party, NPP government, Dr. Kwame Addo Kufuor, has been inducted as the...
Read more

A special church service has been organized to usher in the 65th Legal year of the Judicial Service of Ghana at the Cathedral Church...
Read more

By: Razak Baba The Driver and Vehicle Licensing Authority, DVLA, has stepped up efforts to reduce carnage on the roads with the introduction of the...
Read more