Story By: Nicholas Osei Wusu Voting has resumed after close to two hours of a partial halt in the ongoing...
Read more

The Bono East Regional House of Chiefs has elected Pimampim Yaw Kagbrese V, the Paramount Chief of the Yeji Traditional area in the Pru East District as its first President at a meeting held in Techiman.

The Paramount Chief of the Bassa Traditional Area in the Sene East District, Nana Owusu Sakyi III, was also elected unopposed as the Vice President for them to steer the affairs of the House for a two-year term.

The immediate past President of the former Brong-Ahafo Regional House of Chiefs (BARHC), Pimampim Kagbrese V, garnered five votes out of seven valid votes cast, whilst his contender, the Paramount Chief of Prang Traditional Area in the Pru West District and also an ex-President of the BARHC, Nana Kwadwo Nyarko III, polled two votes.

A High Court Judge in Sunyani, Justice Gabriel Martey-Teye, who swore the president and his vice into office, urged them to exhibit exemplary leadership by ensuring the inclusion all members in decision-making by the House for the progress of the region.

Justice Martey-Teye suggested the need for the House to adopt the Alternative Dispute Resolution (ADR) approach in the adjudication of disputes for expeditious settlement of the number of land and chieftancy cases in Courts that could drawback the speedy development of the young region.
The Bono East Regional Minister, Mr Kofi Amoakohene, expressed optimism that the House would be a source of strong support for the Regional Security Council to promote peaceful co-existence in the region.
Also the Member of Parliament for Atebubu-Amanten, Mr Amoakohene, appealed to them to help for effective maintenance of peace in their respective traditional areas as the basis of creating enabling environment for socio-economic activities to thrive in the region. 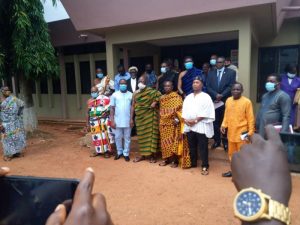 Pimampim Kagbrese V in appreciation to the House for his election assured members that he would be a team-player to foster unity among members to promote the socio-economic development of the region.
SourceGNA
Share
Facebook
Twitter
Pinterest
WhatsApp
Print
Linkedin
Telegram
Previous articlePetrol station explodes in Nigerian city of Lagos
Next articleCourt orders deletion of 8 names from voters register

Story By: Nicholas Osei Wusu Voting has resumed after close to two hours of a partial halt in the ongoing Conference of the New Patriotic...
Read more
Politics

By Jones Anlimah Voting in the Volta regional election of the New Patriotic Party, NPP to elect new regional Executives to man affairs of the...
Read more
Politics

Some unidentified gunmen on Friday night, May 27, 2022 attacked some members of the NPP while they were returning from the Upper East Regional...
Read more
Politics

New Patriotic Party’s (NPP) paraphernalia have rebranded the Ho Technical University (HTU) venue for the regional elections as delegates trickle in for the exercise. The...
Read more