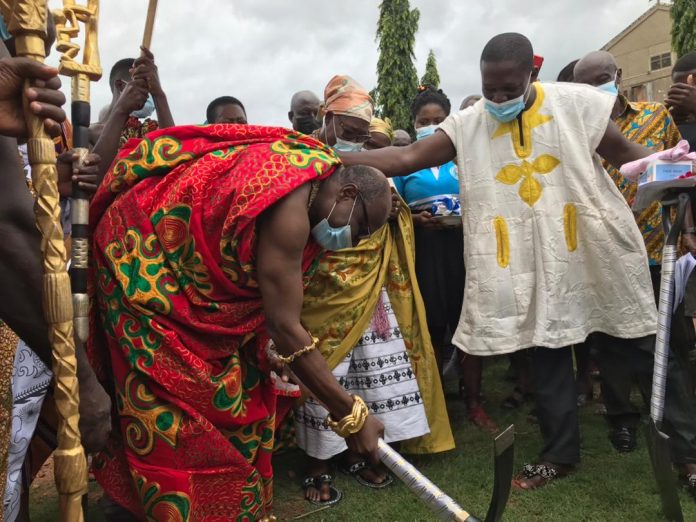 Nana Effah Openamang III, the Chief of Obomeng, and his elders have broken the ground for the construction of a 900,000 Ghana cedis state-of-the-art palace at Nkawkaw in the Kwahu West Municipality of the Eastern Region.
The multipurpose palace,  expected to be completed within 12 months, would replace the dilapidated palace structure, which had been pulled down.
The amount would cover works on the chief’s residence with ancillary facilities, women residence with ancillary facilities, conference hall, auditorium, museum, pavilions and offices.
It would also take care of stools’ room, security posts, guest rooms, general washrooms and paving of grounds.
Nana Openamang said the completion of the palace would indicate that Nkawkaw was ready for a chief, who would help speed up development of the area.
He said the Nkawkaw community had not had a substantive chief for some years now due to a chieftaincy dispute attributed to who was qualified to be enstooled.
Nana Openamang said the architectural design would be such that the palace would be so attractive to tourists.
He called for support from non-governmental organisations, philanthropists and natives of Kwahu, home and abroad, to aid the construction of the palace.
Nana   Openamang advised the people to desist from unguarded utterances such as curses, which had become a common phenomenon and retarding progress.
Nana Osaberima Afari Obuogyan II, the Chief of Obo, lauded Nana Openamang for embarking on such a monumental project and appealed to the public to support the initiative.
He condemned illegal mining activities as operators have taken over the Kwahu lands and called on the security personnel to help fight the galamsey menace.
He stated that the traditional authorities had not availed any land to any person to practice illegal mining in Kwahu and cautioned perpetrators to desist from it.

MP for Wa Central appeals to parents not to neglect educating...