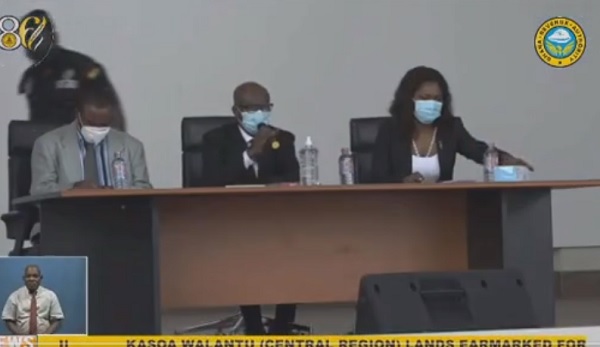 Linguist of the Ejura Dagomba Chief, Abdul Wahab Alhassan, has told the Committee investigating the recent deadly riot at Ejura that one of the victims, Murtala Mohammed aged 26, an auto mechanic apprentice,  was his grandson and personal driver.

The linguist explained that Murtala had driven the Dagomba Chief, Alhaji Umar Hussein to pray to repose the soul of the late Kaaka earlier at Ejura and subsequently to the house of the bereaved family to commiserate with them after the burial.

Giving testimony as the 11th Witness at the on-going public hearing in Kumasi, the Dagomba Chief Linguist who spoke Dagbani, noted that medical experts at the Hospital detected that Murtala died of gunshots that left wounds in both the right ribs and back.

Asked what the Dagomba Chief and bereaved family wished from the Committee, the witness emphasized that the expectations of the people of Ejura is for truth and justice to prevail to ensure peace in the country. This, the  Chairman of the three-member Committee, Justice George Kingsley Koomson said the Committee is committed to.

The 2nd witness for the day and 12th to testify so far, a brother of the other victims Isahaku Abubakari, who testified in Hausa, told the Committee that his late brother, Abdul Nasir Yusif, was  killed about 10 minutes after he himself had escaped bullets from the scene of the street protest.

That was a brother of Abdul Nasir Yusif, one of the people killed in the Ejura riot  giving testimony at the ongoing public enquiry into the disturbances.

CJ to close down District Courts not up to Judicial Service...