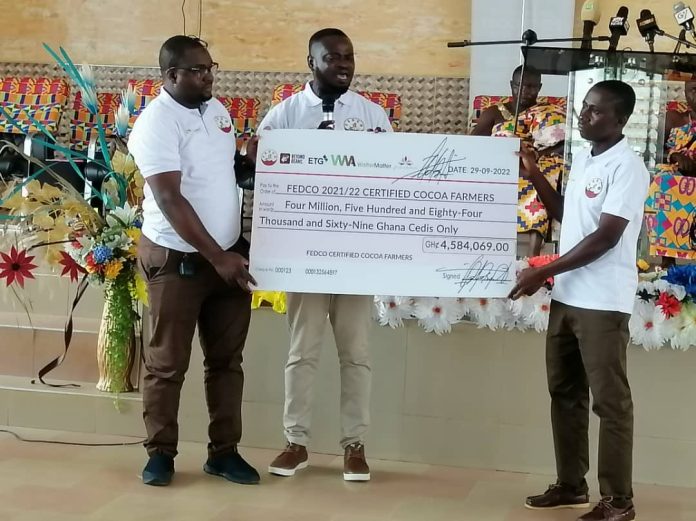 Federated Commodities Limited, FEDCO, a licensed cocoa buying company has paid an amount of 1.14 million out of 4.5 million as premium to certified cocoa farmers in Asankragwa in the Wassa Amenfi West District of the Western Region.

The money, paid as premium to the farmers comes as an additional amount earned on their produce to motivate and encourage them to stay on the sustainability programme of the company.

This year, the farmers earned an amount of 40 per a bag of cocoa.

Fedco in a bid to promote sustainable agriculture has deployed several initiatives to help farmers increase their yields, promote environmental sustainability and as well help get rid of child labour and other negative farming practices.

The move forms part of the company’s corporate social responsibility to the sector. Speaking at the official premium announcement on certified cocoa in the district, the Head of Sustainability at FEDCO, Mr Nuruddin Essilfie mentioned that the FEDCO’S sustainability programme since its inception in 2012 has supported several developmental projects in the areas of education, water and sanitation in various communities they operate.

“We at FEDCO have also embarked on other sustainability programmes such as Afforestation, Accessible Soil and Sustainable Environment Project, Child Labour Monitoring Projects and Tricycle projects. Women participation on the programme has also grown from 18% from 2012 to 37% in 2022, an increase we see as encouraging”, her said.

Touching on the menace of illegal mining on the cocoa industry, Mr Essilfie said, “the situation is worrying.

There is not much we can do than to support government in the anti-galamsay fight”. “I think a lot more efforts need to be put in address the problem before it gets out of hand”, he said.

According to Mr Essilfie claims that, some cocoa farmers are leasing their farms to illegal miners should be of great concern to the government.

The Managing Director of FEDCO, Mrs Maria Adamu-Zibo in a speech read for her said FEDCO in collaboration with its partners have since 2012 invested $11 million in communities who are under the Sustainability Programme through the provision of infrastructural facilities and cash premiums. She indicated that, $2.1 million out of the initial amount was apportioned to Asankragwa.

This amount went into projects including 23 boreholes, three classroom blocks with computer laboratories and libraries as well as four facilities in the Asankragwa enclave.

According to her, FEDCO and its partners have so far built 102 boreholes, 8 classroom blocks with computer labs and libraries, one community center, 9 toilet facilities in addition to GHS42.0million cash premium payments nationwide.

Mrs Adamu-Zibo therefore called on the farmers to continue with the good agricultural practices they have cultivated over the years and do their best to protect the soils from land degradation.

Some of the beneficiary cocoa farmers commended FEDCO for the good job they are doing as they have seen massive improvements in their work and assured of their commitment to the company. They however called on Government to increase the producer price of cocoa to demotivate farmers from selling their lands to illegal miners.

“It very tempting to easily give in to the illegal miners due to mouth-watering offers they make.

However, as farmers, our livelihoods depend on the land so we can’t allow them the galamsay people to destroy our future”, Madam Mavis who owes eight acres of cocoa farm said.

According to her, “my fear is that, some farmers may accept such juicy offers and this will not bode well for the industry”.

Other farmers shared similar sentiments but were unanimous in their calk for increase in the producer price so as boost the morale of cocoa farmers to do more.