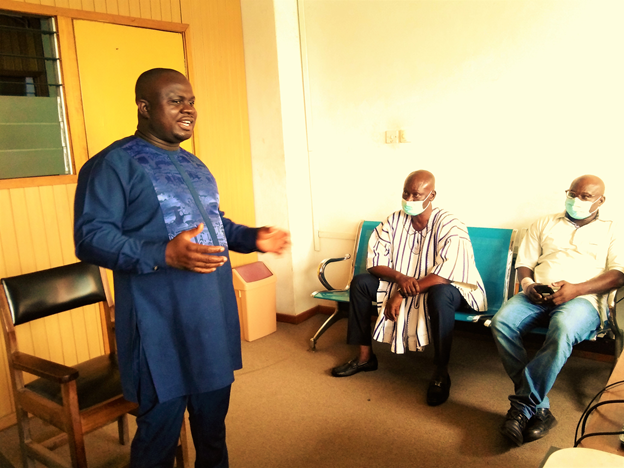 Mr Albert Kwabena Dwumfour, an aspiring President of the Ghana Journalists Association (GJA), is envisioning the set up of a scholarship scheme for the professional development of Ghanaian journalists.
The scheme, according to the aspirant, would seek to train and build the capacities of the journalists in specialized areas of interest relevant to the nation’s growth and development.
Mr Dwumfour, who was interacting with the staff of the Ashanti Regional Office of the Ghana News Agency (GNA) in Kumasi, said the media played a vital role in the nation’s development agenda.
He was, therefore, determined to explore avenues to sharpen the skills and also build the professional competence of journalists for effective discharge of their duties if given the nod as the GJA President.
Other plans include the setting up of an insurance scheme to cater for the welfare of journalists in the area of health, pension and funerals.

Mr Dwumfour said the welfare of the media was one of his priorities, affirming that under his leadership the conditions of service given to journalists would be critically looked at.

The Regional Chapters of the Association would also be strengthened and expanded to bring in more members with plans to implement innovative projects to boost the financial base of the GJA.

The organization, he said, needed a vibrant leadership, which he was ready to provide, and rallied the members to be supportive of his bid to become the President.

“I aim to rejuvenate and make the Association more attractive,” he said in an interview adding that he believed in the unity of purpose, accountability, transparency and freedom of the media as enshrined in Ghana’s constitution.

Danger and squalor for cleaners who remove human waste by hand-UN...