Story by: Benedicta Konadu Ghana's popular barber who is well known as the Celebrity barber, Nikky Okyere, has stated that...
Read more

Story by: Benedicta Konadu Ghanaian celebrity barber well-known as Nikky the Barber has stated that he would like to be...
Read more

The Office of Dr. Zanetor Agyeman-Rawlings, Member of Parliament (MP) for Klottey Korle has organise a horse-riding demonstration on the Oxford Street of Osu to create friendly relationship between the police and the community.

The exercise, which was a project of the MP, was held in partnership with the Mounted Squadron of the Ghana Police Service and the Oxford Street Business Owners Association.

The programme took place simultaneously in three places namely the Oxford Street, the Independence Square Beach and the Police Barracks and afforded some community members, especially the youth to ride on a horse for the first time. 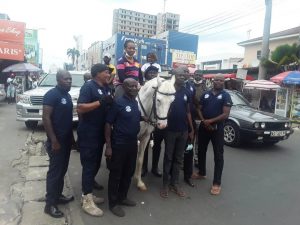 Dr. Agyeman-Rawlings in an interview with the Ghana News Agency said there had been negative sentiment between the police and the community in some sense hence the decision to bridge the gap between them through the initiation of the horse riding.

She said the Mounted Squadron of the Ghana Police Service was located at Osu with 27 horses and aside providing ceremonial services it was important the Unit was made accessible and affordable to the public to become a win-win situation.

Dr. Agyeman-Rawlings said the initiative would be made sustainable through public private partnership with the Oxford Business Owners Association and the involvement of the community.

Story by: Benedicta Konadu Ghanaian celebrity barber well-known as Nikky the Barber has stated that he would like to be the barber for Portuguese footballer...
Read more
General

By: Henrietta Afful Members of Arise Ghana - a pressure group, are hitting the streets of Accra today, June 28, 2022 to demonstrate against what...
Read more
Health

By Seli Baisie A Physician Specialist, Dr. Nii Lante Okunka Blankson says the most commonly abused painkiller is paracetamol. This, according to him, is because paracetamol...
Read more

By: Franklin ASARE-DONKOH Her Ladyship Comfort Kwasiwor Tasiame has directed Arise Ghana organisers of the #KromAyeShe demonstration to end their public protests at 4 pm...
Read more

Ghana’s Ambassador to Burkina Faso, Boniface Gambila has expressed worry about the youth who get deceived by unknown people to travel to Burkina Faso...
Read more

By Tilda Acorlor. The Project Lead of the Eggstra-O Campaign, Ndidi Fordjoe, says women and children must eat eggs to grow well and healthy. She...
Read more

Government lauded for efforts to address climate change in the agriculture...