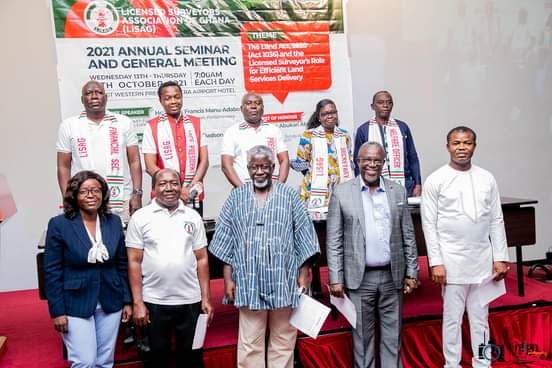 Members of the Licensed Surveyors’ Association of Ghana, LiSAG, have for the first time, in the 16 years’ existence of the association, had the opportunity to choose their Executives through an election. The Immediate Past President, Kwame Tenadu, occupied the position for the past decade and half, as the Association strived to put in place its democratic structures.

However, history was made at the end of the Association’s 2021 Annual Seminar and General Meeting in Accra, which was held from 13th to 14th October, 2021, where Samuel Larbi Darko, got the nod to become the second President of LiSAG.

Theme For Seminar And General Meeting

The theme for the two-day event was “The Land Act, 2020, (ACT 1036) and the Licensed Surveyors Role for Efficient Land Services Delivery.”

The newly elected President, Samuel Larbi Darko, pledged to make the Association vibrant for members to get their fair share of the goodies the profession has to offer.

“I will ensure an all-inclusive administration where members are consulted on all critical issues of national concern. Together with members, we will make sure that all surveying jobs are executed by Licensed Surveyors and not allied professionals, which has been the norm over the years. Under my leadership we will do everything humanly possible to put up a national Secretariat that befits the status of the Association” he pledged.

Opening Of The Seminar

Earlier at the opening of the two-day Annual Seminar and General Meeting, the Chairman of the Parliamentary Select Committee on Lands and Forestry and MP for Ahafo Ano South East, Francis Manu-Adabor, in a keynote address, reminded Licensed Surveyors, to acquaint themselves with relevant provisions in the new Land Act to avoid possible sanctions.

Mr. Manu-Adabor, said after sustained pressure by the Association to get the Law promulgated, Licensed Surveyors in Ghana cannot act ignorantly and in contravention of the Act.

In this light, Mr. Manu-Adabor, who is also a Licensed Surveyor, urged leadership of the Association to explore all avenues to get members abreast of the relevant provisions of the Law.

“With the coming into force of this new Act, it cannot be business as usual. I can say without any equivocation that the sanction regimes under the Law are quite many. It behoves members to know all these in order not to fall prey in the course of work” he remarked.

The immediate past President of LISAG, Kwame Tenadu said as part of the Association’s branding initiative, leadership has made it easier to identify members through the production of annual calendars which provide contact details of members in good standing. He called for sustained effort by members in implementing measures to weed out quack surveyors and charlatans from the system.

The Acting Director, Survey and Mapping Division of the Lands Commission, Naa Abukari Abdulai, in a message asked members of the Association to seek audience with his office for clarity on issues to avoid rumor mongering and mudslinging which breed tension.