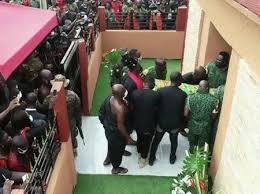 The Ashanti Regional Police Command is investigating the circumstances that led to the abuse of the COVID-19 safety protocols during the recent final funeral rites of Mr Kwadwo Owusu Afriyie, popularly known as ‘Sir John’.

The funeral, held from June 3 to 5, at Sakora-Wonoo in the Kwabre-East District of the Ashanti Region, saw a mass gathering of mourners. However, the majority of the thousands of mourners defied the laid-down safety protocols such as the wearing of nose masks and social distancing.

Since then, many concerned citizens, opinion leaders, and professional bodies, including the Ghana Medical Association (GMA), have expressed displeasure about the breach of the safety protocols.

The GMA said the incident called for investigations since the teeming mourners at the community was a recipe for the spread of the virus. The unfortunate development, according to the Association, violated the Imposition of Restrictions Act, introduced as an emergency measure to contain the spread of the COVID-19.

A source at the Regional Police Command, in an interview with the Ghana News Agency (GNA) in Kumasi, confirmed that some family members of the late Sir John were officially invited on Thursday, June 10, to assist with investigations.

Mr Charles Owusu, a representative of the bereaved family, in an interview, confirmed the invitation by the police and said they were ready to cooperate with the law enforcers in their enquiries. Dignitaries at the funeral included a government delegation and representatives of the various political parties.

Mr Owusu Afriyie, a legal practitioner, until his death, was the Chief Executive Officer of the Forestry Commission. Born in 1952, ‘Sir John’, a former General-Secretary of the New Patriotic Party, died at the Korle-Bu Teaching Hospital on July 1, 2020.