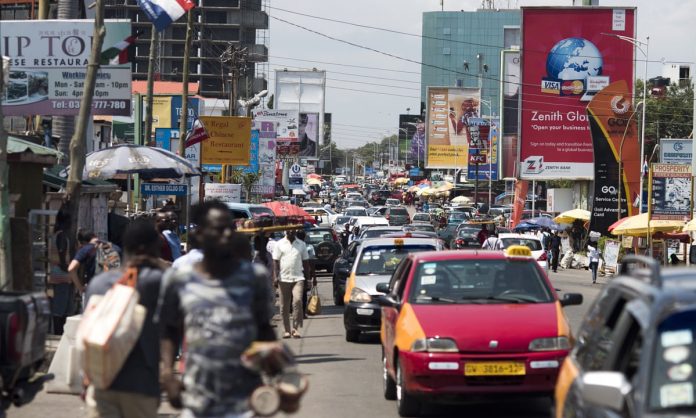 Parts of Accra have been flooded, after nearly 6-hours of downpour. Areas such as Oshuiman, Tema, Tesano, Madina and its environs have been badly affected by the rains.

Commuters on the Accra- Tema Motorway, Achimota –Tesano stretch of the Kumasi – Accra and Madina Highways were stranded this morning due to the downpour, causing vehicular traffic on these routes.

Meanwhile, residents of Oshuiman a Community near Amasaman in the Ga West District of the Greater Accra Region say they are always in a state of fear when there are signs of rainfall.

This is because anytime it rains they seem to be cut off from the city, due to the flood-prone nature of the community, adding that it impedes movement to and from the community.

Our reporter Regina Agana Akanteba sampled views of some residents from Oshuiman and Tesano for GBC News.

“I was on my way going to work but there was no car on the road due to the rains because most the drivers have been complaining about the bad nature of the road,” a resident stated.

“Everywhere is flooded, we didn’t know it will rain this long. It is very disturbing and the taxis cannot plough the road thereby impeding movement to and from the community. The road is filled with water due to the pot-holes,” another resident said.

“I Always go to work early but today it is difficult to even go out because of the flooded nature of the road. Drivers have decided not to work today and everyone is indoors,” according to a resident at Oshuiman.

UK's PM May to face another day of Brexit questions