The Ghana Cocoa Board (COCOBOD) is to set up an anti-smuggling task force in the Volta and Oti Regions.

The Volta and Oti Regional Managing Director, COCOBOD, Mr Solomon Donkor, who announced this, said the move would prevent farmers from selling cocoa beans to their counterparts in Togo.

It will also discourage the transportation of cocoa beans to and from the regions to other parts of the country.

Mr Donkor, in an interview with the Ghana News Agency (GNA), after an engagement with managers, depot keepers and purchasing clerks of Licensed Buying Companies (LBCs) in Hohoe, said the Directorate would involve the security agencies, Coordinating Councils of the two regions and members of COCOBOD in the task force.

“The taskforce is very necessary to embark on operation now. We are in the cocoa season now till February, where massive production is seen and the sales must be checked.

“We are coming out to do everything necessary and possible to manage the act to enable the government to get the best out of the investments being made in our farmers.”

He said the meeting was to give the Directorate first-hand information on the causes of low purchases of cocoa in the region.

Mr Donkor said two regions were noted for quality cocoa but annual production was on the decline despite support and interventions by COCOBOD to boost yields.

The Managing Director said the delay in release of funds, the cocoa price differential between Ghana and Togo and the monetary needs of cocoa farmers were some of the factors that led to the low buying of cocoa.

He said COCOBOD would sensitise the communities about the government’s investment to boost cocoa production and to transform farmers’ lives.

He said the farmers needed to reciprocate government’s support by selling the cocoa beans produced back to the government to increase production.

“We will tell the farmers that all the necessary support being utilities, government interventions, social and education that they need will be given them. Educate the farmers even on what they do and the risk of smuggling cocoa so that if they refuse and are caught, the necessary actions will be taken to deal with them.”

Mr Donkor revealed that the Directorate would introduce a passbook system “so that the number of chemicals that they receive, we are estimating that they have an increase of produce from their farms.”

He noted that technical advisors, assistance and community extension agents were to assist farmers to adopt modern ways of farming.

The Managing Director said COCOBOD was rolling out a programme to recultivate old arable cocoa farms through the engagement of labourers.

The farmers would prepare the land while COCOBOD would take up the planting of the seedlings, plantain suckers and manage the farms for two years before releasing the farm to the farmers.

“The labourers who are working and taking care of the farms will be supported to maintain themselves while the government pays the farmer for the number of trees cut as well as based on the size of the farm.” 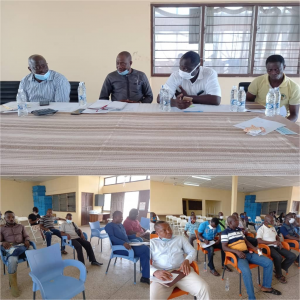 The Eastern Regional Minister, Seth Acheampong says Security Services and service providers are assessing the damage to ECG property so that light can be...
Read more
General

The Minister of Environment, Science, Technology and Innovation, Dr. Kwaku Afriyie, has expressed worry about the huge quantum of losses incurred as a result...
Read more
Health

Major health facilities in Kroboland (Yilo and Manya Krobo Districts) have resorted to the use of generators to sustain their daily operations as a...
Read more

An Economist, Prof. Godfred Bokpin says the current ratings of the Economy by S&P is of no use to the country at the moment. He...
Read more

Amid COVID-19, UN commitment to peace ‘more urgent than ever’