Speaking to Journalists in Accra, Dr. Yaw Osei Adutwum said he was not happy, some people are speculating negativity about his work in the sector.

He explained that, ”there are a lot of initiatives to be rolled out to improve the education system”,  and that is exactly his vision.

On the Semester based academic calendar, Dr. Yaw Osei Adutwum stated that it was the intention of the Ministry to bring convenience to both teachers and pupils, hence the introduction of the Policy. However, due to agitations, it has been reversed.

Teacher Unions in the basic education sector and some CSO’s earlier this month kicked against the government’s change of the trimester-based academic calendar to a semester-based one.

They argued that the Policy does not suit the country’s educational system. 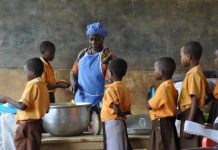 I went to Shatta Wale’s concert for peace, not to steal...