By Augustus Acquaye The Speaker of Parliament Alban Bagbin has called on government to make available the budgetary allocation to...
Read more

By Rachel Kakraba The Accra Metropolitan Assembly, AMA, has given its backing to the directive by President Akufo-Addo for MMDAs...
Read more

By Rachel Kakraba Corruption Watch Ghana has called for a review of Ghana's Assert Declaration law, to make it more...
Read more

Miss Nancy Dado, a staff midwife of the Akatsi Municipal Hospital has won the overall best midwife in the health profession of the Volta Region.

This year’s event was held at the Keta Midwifery Training College in the Keta Municipality of the Volta region. It was on the theme “Follow the Data, Invest in Midwives.”

Dr Banabas Yeboah, a representative of the Minister of Health, Mr Kwaku Agyeman-Manu in his speech, stated that midwives play some important roles in Ghana’s population, hence the need to have their efforts rewarded. 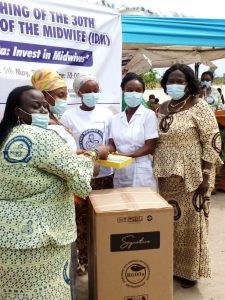 He said, government would continue to ensure midwives work with ease by providing them with motivational packages.

Mr Robert Adatsi, the Deputy Volta Regional Director in charge of clinics, on his part, said midwives should be proud of themselves and work with all efforts to help mother Ghana.

Agbotadua Kumasa, spokesperson for Togbui Sri III and chairman for the occasion in his address, extended congratulatory messages to all deserving nurses and midwives for their hard work.

He urged members of the public to offer their maximum respect to all midwives, saying “without them, most of us would not have been alive today”.

Agbotadua Kumasa also underscored the need for widwives to keep their good works by raising the standard of the profession.

Miss Dado, one of the awardees, disclosed to the GNA her hard work would improve to save humanity.

She appealed to other colleagues to serve members in their various communities with dedication and commitment.

Other dignitaries present at the ceremony include Togbi Goka II, Chief of Anloga, Togbi Dallah Avege III, Mama Wui Amegashie of Keta. The rest are heads of department and other health workers.

Plagues, tablets, table top fridges, cash, among others were the awards given the deserving workers.

It was organised by the Ministry of Health in collaboration with the Ghana Registered Nurses and Midwives Association with funding from the UNFPA and Catholic Relief Services.

By Augustus Acquaye The Speaker of Parliament Alban Bagbin has called on government to make available the budgetary allocation to...
Read more
General

By Rachel Kakraba The Accra Metropolitan Assembly, AMA, has given its backing to the directive by President Akufo-Addo for MMDAs to ensure the immediate removal...
Read more
General

Story by: Franklin ASARE-DONKOH The Absentee Members of Parliament who have been accused of breaching the 15-day absence rule are expected to appear before the...
Read more
Health

By Noah Owusu & Ato Williams Administrator of the Kaneshie Polyclinic, Adelaide Setordji, says the hospital has been working since Tuesday, May 24, 2022 after...
Read more

By Yvonne Atilego The Western Regional Health Directorate has dismissed reports of a case of Monkeypox in the Region. There were reports that the disease...
Read more

By Murtala Issah The Noguchi Memorial Center for Medical Research has found the Poliovirus in samples of water scooped from some drains in the Sagnerigu...
Read more