The Police on Wednesday, January 20, substituted and preferred fresh charges on two suspects allegedly involved in the murder...
Read more

Joe Biden has been sworn in as the 46th US president at the US Capitol in Washington. Vice-President Kamala Harris...
Read more

President Akufo-Addo and flagbearer of the NDC, John Dramani Mahama have signed the Presidential Peace Pact as the country goes to the polls on Monday, December 7.

The Peace Pact is to ensure the two major Political Parties, NPP and NDC, commit to peace and also accept the verdict of the people when the election results are declared.

President Akufo-Addo reiterated the NPP’s commitment to a Peaceful election.

Flagbearer of the NDC, John Dramani Mahama said there is the need for institutions to work impartially for a peaceful election.

Justice Anin Yeboah said any election dispute resolution will not go beyond forty-two days as contained in the 4th Edition of the Elections Adjudication Manual.

Former President of Liberia, Ellen Johnson Sirleaf, commended the two leaders for showing commitment to maintain the long-standing reputation of Ghana as a beacon of peace on the continent. 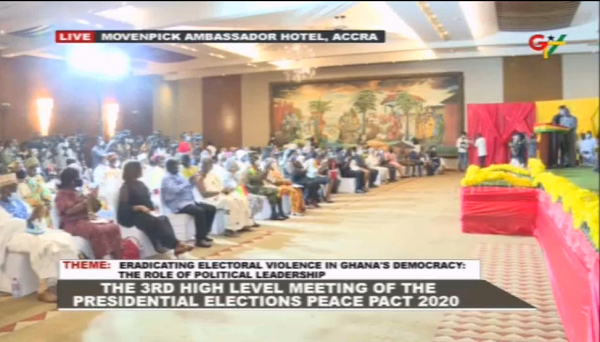 Joe Biden has been sworn in as the 46th US president at the US Capitol in Washington. Vice-President Kamala Harris has taken her oath too...
Read more
General

The President, Nana Addo Dankwa Akufo-Addo, has appointed Mr Akwasi Agyeibi Prempeh, as the Commissioner for the Aircraft Accident and Incident Investigation and Prevention...
Read more

Lawyer for former President John Mahama in the election petition case, Tsatsu Tsikata, has notified the Supreme Court of an application for review of...
Read more

The Supreme Court has adjourned hearing of the 2020 Election Petition to Tuesday, January 26. The adjournment comes after the president of the seven-member panel...
Read more

President Akufo-Addo has made some appointments at the Presidency which are in Acting capacities. He retained Madam Akosua Frema Osei Opare as Chief of Staff,...
Read more