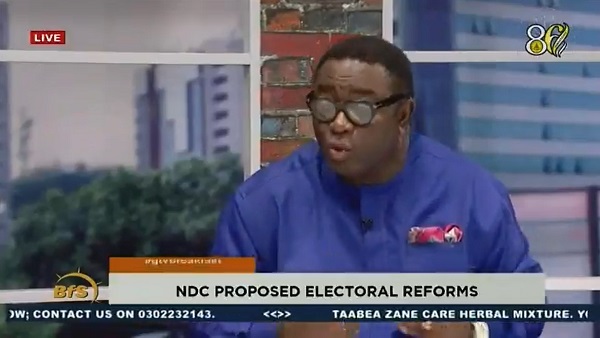 Director of Elections of the NDC, Elvis Afriyie Ankrah is asking Ghanaians to look thoroughly and dispassionately into the issues the party has raised pertaining electoral reforms and objectively, dissect and discuss them in a manner that would grow the country’s democratic processes.

Speaking on the GTV Breakfast Show, Mr. Ankrah said the conversation about electoral reforms must not be seen from a partisan perspective, but rather a national one. He said the recommendations made for electoral reforms would go a long way to tidy up Ghana’s electoral journey, if everyone took the trouble to pick the items raised and critically analyzed them to add or subtract and to push for the right environment to progress Ghana’s democracy.

‘’This conversation is not an NDC, nor NPP one, it is one for Ghana’’, Mr. Ankrah reiterated.

On the issue of security, Mr. Ankrah said it is time to determine and clearly spell out what the parameters are when it comes to security at the polls. In his view, that caveat is vague, giving an example of the Ayawaso West Wuogon by-election violence, where the EC Chairperson, Mrs. Jean Mensa was quoted to have said that security at the polls was within the purview of the police and not the EC.

From Mr. Afriyie’s point of view, the EC provided a budget to be approved, which also included the policing aspect and entire security at the polls, and therefore, the issues need to be clarified.

”Who is responsible for security, the police? When the military comes in, we need to know, so that when we see people dressed differently than the Police, we know, so that if someone else is wearing a different uniform, we know that person is an intruder”, according to Mr. Ankrah.

Mr. Ankrah said one way to also ensure that there is civility within the country’s electoral system, is to ensure that perpetrators of crimes are brought to book. He called for the repeal of the PNDC Law that required that the Attorney General give written consent before someone who committed an electoral offence can be prosecuted.

Apart from abolishing the concept of Regional Collation Centers, Mr. Ankrah said the Statement of Poll, (pink sheets), should be relooked at because it is complex and cumbersome to fill out. The pinks sheets he stated must be more user-friendly. 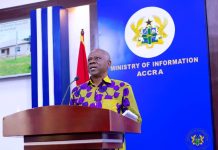