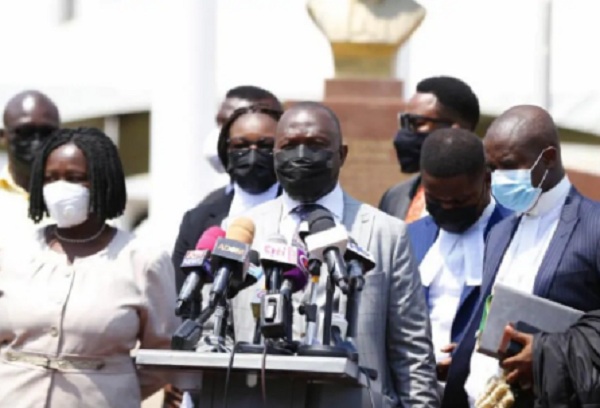 Communications Director and spokesperson for the petitioner, Sammy Gyamfi, has denied rumours of an alleged contempt charge against Dr. Dominic Ayine for his comments after last Tuesday’s court sitting.

“Why are lawyers like Kojo Oppong Nkrumah, Nana B—who by the way are juniors by far to Dr. Ayine—trying to instigate the court and incite the court against him on the basis of things he has not said?”

“The court, I believe, has been very liberal in how it has conducted these proceedings, and even where seniors who are on record have erred, the court has been very liberal in cautioning them here and there. We saw them do that to Frank Davies and other senior lawyers. Because if the broad rules of contempt are to be applied strictly, then the first culprit would be Kojo Oppong Nkrumah.”

Spokesperson for the second respondent, Nana Adwoa Adobea Asante challenged the Petitioner to produce his evidence that President Akufo-Addo did not attain more than 50 percent of the total valid votes cast. She said they are ready with their closing submissions.

“The petitioner keeps on coming to us stating that Nana Addo Dankwa Akufo-Addo did not obtain more than 50 percent of total valid votes cast. Where are your figures? Show us your figures.”

Listen to the attached audio for detailed information.