Leadership of four Labour Unions in the Public Universities in Ghana have given government a week ultimatum to address...
Read more

Built on mutual trust for development, bilateral trade volume between Ghana and China peaked at US$9.57billion in 2021 from...
Read more

The Ashanti Regional capital of Kumasi erupted into a spontaneous widespread jubilation after Chairperson of the Electoral Commission (EC) Mrs. Jean Mensa declared results of the 2020 Presidential election.

GBC’s Ashanti Regional Correspondent, Nicholas Osei-Wusu reports that people from all facets of life poured onto the streets singing, blowing the vuvuzela amidst dancing, while motorists also honked in unison.

With pubs and bars overflowing with jubilation, as popular campaign songs of the NPP and National Democratic Congress (NDC) were played.

The Regional Secretary of the New Patriotic Party (NPP), Sam Pyne expressed gratitude to God and the EC for a successful election.

Scene at the President’s Nima Residence in Accra

Bibiani jubilates for President Akufo-Addo
The whole of Bibiani town was thrown into an ecstatic jubilation, moments after the EC, Mrs Jean Mensah, the Electoral Commission Chair, declared NPP’s Nana Addo Dankwa Akufo Addo, as President-elect of the Republic of Ghana, at the end of the 2020 general election. 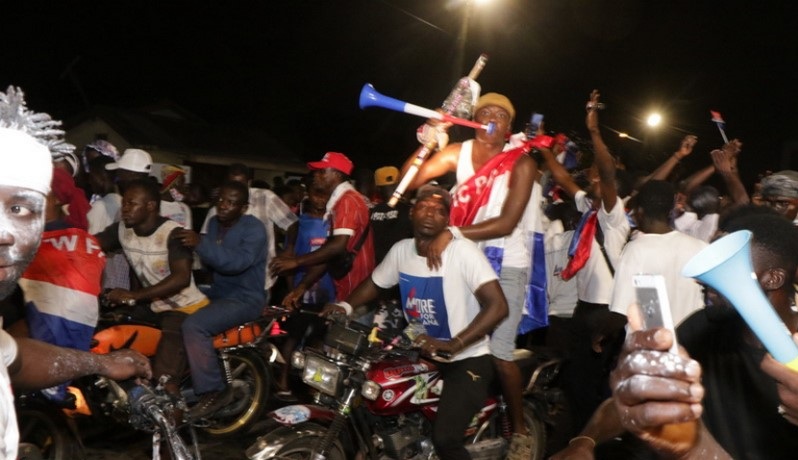 Vehicles, motor bikes, tricycles and the like, touted their horns to greet the result.

Drinking spots were suddenly filled with jubilant supporters of NPP, singing and dancing in merrymaking.

A cross section of the people interviewed expressed their happiness that Nana Addo had been given four more years, to do more for Ghanaians.

Hundreds of supporters of the New Patriotic Party (NPP) in the Cape Coast Municipality in the late hours of Wednesday, December, 09, took to the streets to jubilate over the victory of their Flagbearer, Nana Addo Dankwa Akufo-Addo.

Amidst singing and dancing, both the young and old moved in a frenzy while celebrating their victory over the keenly contested election, causing traffic jam.

The supporters clad in NPP colours and paraphernalia moved from the party office at Melcom through Brofoyedur, blowing horns and vuvuzelas, while singing, clapping and dancing to the famous NDC campaign song, ‘Okada’.

In an interview with the GNA, Aunty Efua, a 34-year-old trader indicated that their decision to vote for the NPP was a much-calculated effort as the elephant party had brought many developments to the Constituency in the last four years in power.

She revealed some initiatives comprising Free SHS, One District one Factory, One Constituency One ambulance, among others, which made her cast her ballot for the NPP.

”Free SHS and others had saved me money and provided a job for my unemployed child, so I voted for Nana to continue his works”.

Abdullai Usmah, a 50-year-old fisherman, expressed delight that NPP won again saying, Nana Addo deserved another term because he had delivered on his promises to transform Ghana.

He appealed to the opposition party to stay calm and accept the verdict for the common good of the country.

Nana Akufo-Addo won 51.59% of the 13 million votes recorded in the just-ended December 7 polls.

However, both the Cape Coast North and South seats were won by the National Democratic Congress (NDC).

Leadership of four Labour Unions in the Public Universities in Ghana have given government a week ultimatum to address...
Read more
Business

Built on mutual trust for development, bilateral trade volume between Ghana and China peaked at US$9.57billion in 2021 from US$6.67billion in 2017, the Chinese...
Read more
Technology

By Tilda Acorlor Newly appointed Captain of Kpando Hearts of Lions, Dickson Sakabutu has assured fans and football enthusiasts in the Volta region of a...
Read more
General

By: Maltiti Sayida Sadick “Well for the Senior High Schools most of their infractions are on procurement, management of their stores and when they were...
Read more