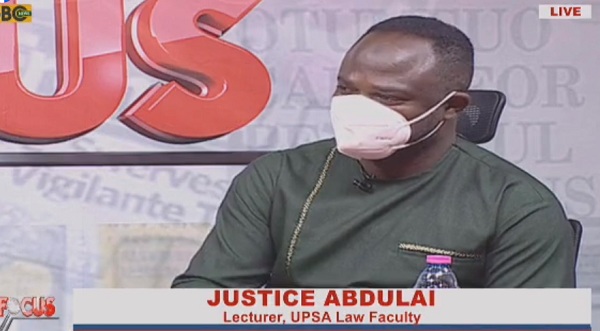 A Law Lecturer at the University of Professional Studies, UPSA Justice Abdulai has raised concerns about the sources of information to the Speaker of Parliament for which he is unable to declare the Assin North seat vacant.

This is because the matter is currently a subject of Appeal in court. In a letter to the Registrar of the High Court, the Speaker said if he declared the Assin North seat vacant, he would be interfering in a matter that was pending before the courts.

Reacting to this, Mr Abdulai said although the Speaker’s decision is in line with the law, some procedures prior to arriving at the decision raised red flags, which he described as improper.

“The Speaker’s position is in line with the law, there is no dispute about it, however, it is the sources of information he relied on that is problematic. We noticed that indeed the speaker served with an order of the High Court declaring the seat vacant. In a way, it did not require the Speaker to do much because it was only an informative order to the Speaker. However, within the same period, the Speaker had received an application for stay of execution which came through the back door, and naturally that is improper because service to the House of Parliament goes through the Clerk of Parliament, it doesn’t go through the Speaker. Clearly, this is improper, because the Speaker shouldn’t be seen to be having some private discussions with the member of Parliament whose seat is in contention.”

Mr Abdulai said the Speaker does not have the authority to declare the Assin North seat vacant. He said there are specific arms of government that have jurisdiction over such matters.

“The Speaker does not have that authority when the High Court has already made that order, and indeed he is not even required to make any declaration because the declaration has already been made by a High Court. Each of them (Legislature and Judiciary) has its own jurisdiction with regard to the matters before us however, whichever way it goes for instance if the court makes a decision, the legislature has no option than to comply. In a nutshell, everyone has its own lane,” according to the Law Lecturer at the University of Professional Studies, Justice Abdulai.