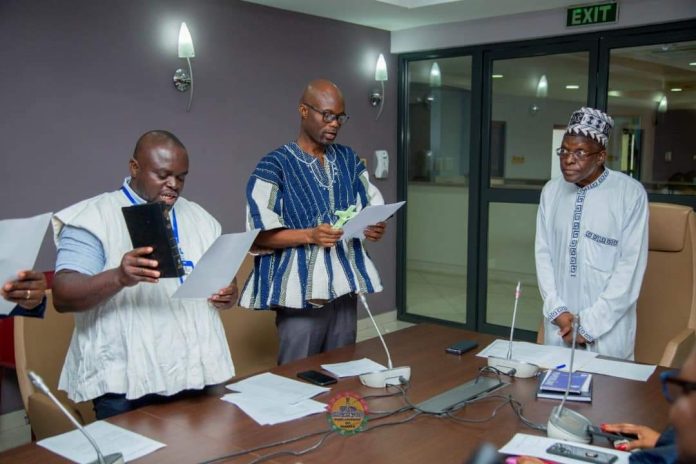 The newly elected executives of the Parliamentary Press Corps took over effectively on 4th April 2022 for three years subject to renewal with the promise to partner Speaker to maintain harmony in the chamber.

The 8th Parliament could be best described as an acrimonious and imbalance one the country has ever witnessed before, in the 4th republican dispensation due to 137, 137 and 1 independent as the NDC side has several times forced the governing NPP side to do what it is deemed to be rightful thing when it comes to public business.

Speaking at the swearing-in on 4th April 2022 at eth Parliament House, The President of the Corps, Simon Agianab noted that, the press in Parliament are not happy reporting chaos all the time and they are equally very concerned about the seeming lack of dialogue but noted that “we pledge to support speaker through our work to maintain order and harmony in the chamber”.

He also pledged as an executive body to put in their best to ensure the corps distinguishes itself creditably like never before.

On the issue of the attrition rate, he said, it has not only been affecting parliament as an institution, the press corps has also had its fair share-this is why such a capacity-building exercise is very opportune and timely.

According to him, “Journalists in Parliament are the first information vehicle to the outside world and thus must always be in the position to give accurate accounts of happenings. The corps mirrors parliament through their reports. This is why periodic training is very critical and also enables the press corps to appraise themselves with the Standing Orders which guides the conduct of Proceedings”.

The Dean appreciated Mr. Speaker for his immense support to the Parliamentary Press Corps and others “we now have a decent place we call the office to aid in the discharge of our duties. Your decision to ensure at least a member of the Corps is part of international trips for coverage is testimony to the fact that progress of the PPC is a priority for you. Such trips do not only afford coverage but also exposure to our members”.