Walk, work and pray for me – NDC running-mate to Ketu North Chiefs

By Ivan Amponsah. South Africa’s President Cyril Ramaphosa has arrived in Accra on a three-day state visit. The visit is to...
Read more

Fifa has dismissed the protest by South Africa that called for the replay for the 2022 World Cup qualifier...
Read more

By Rebecca Ekpe. Government has the onerous task of protecting the Private Sector, as it remains the largest employer in...
Read more

Professor Naana Jane Opoku-Agyemang, the running mate of Mr John Mahama, flagbearer of the National Democratic Congress (NDC) has appealed to Chiefs and people of the Ketu North Constituency to support her and the Party to victory.

She said there was the need for all, particularly the chiefs to “walk with me, work with me and pray for me” so that together, the NDC would come back to power and build a united and prosperous Ghana.

Prof Opoku-Agyemang who made the appeal at a durbar of Ketu North Chiefs at Afife, said the love and enthusiasm that greeted her and her campaign team was demonstrative of the people of Ketu North and Volta Region’s love for the NDC noting, the Party would depend on their continuous support for a comeback.

The second day of the former Education Minister’s three-day campaign tour of the Volta Region saw her visit two communities each in Ketu North and Ketu South Constituencies and one in Keta Constituency and at all places visited, she met a thrilled and charged crowd waiting to welcome her.

It started from Afife, where the chiefs defied the heavy rains in the morning to meet her and the team to the presentation of citation by Volta South Queen mothers extolling her qualities and to an expectant crowd in the evening at Keta. 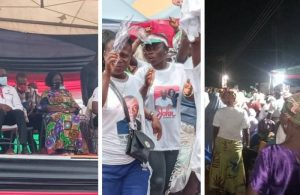 Prof Opoku-Agyemang throughout her visits called on the people not to be deceived by the promises of the ruling New Patriotic Party (NPP) and the handouts they would give during this campaign season saying, such few cedis would not give them good roads, good health, employment and importantly, peace.

The first female Vice-Chancellor of a public university rather asked for people to vote for the NDC, which she described as a party that “delivers on its promises, sustains projects and adds to them and respects women and by extension, everyone”.

Dr James Klutsey Avedzi, Member of Parliament (MP) for Ketu North, said his constituents should not make the mistake to change their voting pattern because with him as their MP and Mr Mahama as their President, more development projects would come to the area.

He said the eight years of the previous NDC government brought lots of projects including rural electrification, school infrastructure and road infrastructure to the Constituency, things the current administration either stalled or could not add to.

By Ivan Amponsah. South Africa’s President Cyril Ramaphosa has arrived in Accra on a three-day state visit. The visit is to...
Read more
Sport

Fifa has dismissed the protest by South Africa that called for the replay for the 2022 World Cup qualifier against Ghana that the Bafana...
Read more
General

By Rebecca Ekpe. Government has the onerous task of protecting the Private Sector, as it remains the largest employer in Ghana. In the meantime, the...
Read more
General

Alhaji Mashood Mohammed from Mion District in the Northern Region has been adjudged the 2021 National Best Farmer at the 37th National farmers Day...
Read more
Education

By Nicholas Osei-Wusu. Girl-Child Education Campaign in Ghana has been boosted following the graduation of the youngest ever student of the Kwame Nkrumah University of...
Read more

The NDC Caucus in Parliament has assured Ghanaians that it will continue to use every legitimate and lawful channel to resist the 1.75% E-Levy...
Read more

By Murtala Issah. Running Mate for the NDC in the 2020 elections, Professor Jane Naana Opoku-Agyemang has called for the creation of a fair society...
Read more

Put interest of children first – Gender Minister to caterers of...