Speaking on the GTV Breakfast Show, Mr. Iddrisu said the New Patriotic Party, NPP, government could have taxed Ghanaians through both E- levy and tollbooth. “We care about the people of Ghana that is why we have replaced tollbooth with E-levy”, he stated.

“It is about their interest and not the interest of the people… they even taxed condom and Kayaye’s  during their time”, he added.

He however stated the need for Ghanaians to have a positive mindset for the Government. “This is not the first time the Government is taxing the people. How can the government build the country without tax “, he asked rhetorically. 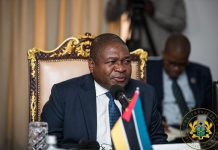 Mozambican President to address Ghana’s Parliament on May 25