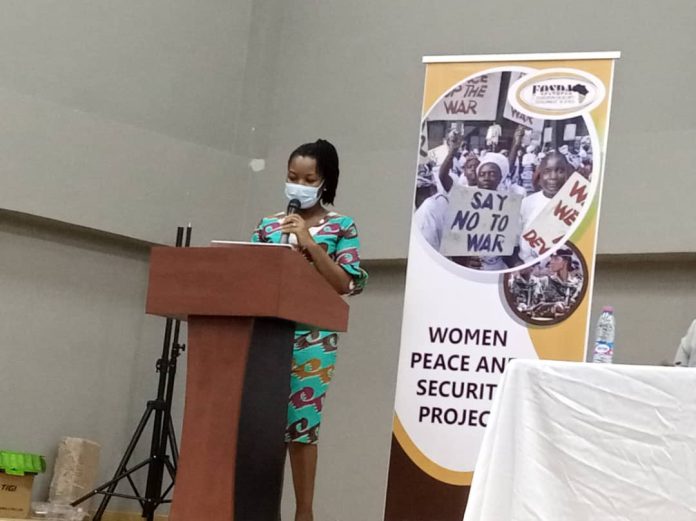 Data has shown that only 14.5 per cent of women are represented at all levels in political and leadership roles in the country despite efforts being made by some gender activists to bridge the gap.

It is for this reason that, the Foundation for Security and Development in Africa, FOSDA, has launched the Women, Peace and Security project to help improve the participation and representation of women in peace processes at all levels.

Speaking at the ceremony in Accra, Principal Programme Officer at the Ministry of Gender, Children and Social Protection, Vera Karikari Bediako said gender equality serves as catalyst to the sustenance of peace and stability hence the launch of the programme.

The launch brought together 35 women across different regions in the country made up of entrepreneurs, farmers and queen mothers among others earmarked to receive training under the Women Peace and Security project.

The goal is to improve the participation and representation of women in peace processes at all levels in Ghana.

The Principal Programme Officer at the Department of Gender, Children and Social Protection, Vera Karikari Bediako called for equal participation of women in key decision making processes for accelerated development.

“It has been said that gender equality is the number one predictor of peace, more so than level of democracy or religious identity. Therefore, improving the participation and representation of women in peace processes at all levels in Ghana is the way to go in achieving sustainable development. Promoting gender equality and women’s human rights requires recognizing and transforming social, political and economic structures for human security and peace for all” she stated.

Acting Executive Director of FOSDA, Theodora Anti called on Parliament and other relevant stakeholders to expedite action on the Affirmative Action Bill to halt the wanton discrimination against women.

“There have been successes but definitely not enough to take us to where we want to go. We are using this platform to call for more women and advocate for the affirmative action bill to be expedited. A Lot of work has been done around affirmative action but we are not seeing much progress. We call on parliament and all hands on deck approach so that the bill can be passed as soon as possible” she stated.

Executive Secretary of the Peace Council, George Amoh, charged women to involve men in efforts towards the fight against gender based violence and its related issues as it is a collective responsibility.

“I just want to encourage our women to partner with the men to ensure we have improved security and peace in this country. There are a lot of insurgents around us who are trying to disturb the peace of this country. We all must be security conscious to build a collective resilience’’, Mr. Amoh stated.

The FOSDA Women Peace and Security project titled “enhancing the technical experts of women Peace Builders in Ghana has a Canadian Fund for local initiatives.