2019 WAFU Cup: Ghana through to final to meet host, Senegal

By: Franklin ASARE-DONKOH The World Health Organization (WHO), has projected that Africa is likely to experience a 5.3 million health...
Read more

By: Peter Agengre A Legal Practitioner, Lawyer Lamtiig Apanga, has declared his intent to contest the parliamentary primaries on the...
Read more

By: Roberta Gayode Modin Content creator, Jeffery Nortey who is noted for making funny skits that throw the spotlight on...
Read more

Hat-trick hero Shafiu Mumuni fired Ghana into the final of the 2019 WAFU Cup of Nations after beating Ivory Coast 3-1 in the semifinal at the Stade Lat Dior in Thies, Senegal on Tuesday.

The Black Stars had the first chance on goal in the 10th minute, but Joseph Esso saw his 20-yard free kick brilliantly saved by keeper Eliezer Ira Tape. 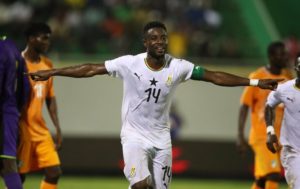 Ivory Coast nearly took the lead in the 21st minute after a great turn on the edge of the box by David Fofana, but his pile-driver shaved the wrong side of the post.

Ghana had another opportunity from a set-piece seven minutes later and were unfortunate not to score when Augustine Okrah’s 22-yard attempt struck the woodwork.

On the half-hour mark Ghana took the lead after a series of blunders inside the Ivory Coast box. Initially, Tape spilled a rather timid 16-yard shot from Okrah into the danger zone which was followed by defender Koffi Kouame’s attempted clearance ricocheting of Mumuni and into the net to make it 1-0.

The Elephants tried to find their way back into the game before the break but were unable to do so as they entered the tunnel trailing by a goal.

It was a blistering start to the second half from Ghana who scored their second goal a minute in after the restart when Mumuni headed home a sweeping right-wing cross from Okrah to double the lead.

In the 50th minute it was 3-0 to the Black Stars after a third goal from Mumuni, the Ghanaian captain completing his hat trick with another clinical 10-yard header after latching onto a left-wing cross this time.

Ivory Coast attempted to mount a comeback and even managed a consolation goal in the 76th minute courtesy of a 22-yard free kick from Aboubacar Doumbia, but it was too little too late as they exited the tournament.

Ghana, the 2017 WAFU Cup champions, will now get a chance to defend their crown in the final of the Cup competition on Oct. 13 against Senegal.

By: Franklin ASARE-DONKOH The World Health Organization (WHO), has projected that Africa is likely to experience a 5.3 million health...
Read more
Politics

By: Peter Agengre A Legal Practitioner, Lawyer Lamtiig Apanga, has declared his intent to contest the parliamentary primaries on the ticket of the National Democratic...
Read more
Entertainment

SOURCE: BBC NEWS Will Smith has said his "bottled" rage led him to slap comedian Chris Rock on stage at the Oscars in March. The actor has...
Read more
Africa

By: RACHEL QUARTEY The President of the Federal Republic of Nigeria, Muhammadu Buhari has reaffirmed the commitment of his country to the Economic Community of...
Read more

By: Seli Baisie The President of the Republic, Nana Addo Dankwa Akufo-Addo, has congratulated the Black Stars after their spectacular performance that led to a...
Read more

SOURCE: BBC NEWS Cameroon and Ghana will be looking to win their next two group games to stand any chance of getting into the round...
Read more