Former Ghana international, Anthony Baffoe has charged the Black Stars to show anger for a win ahead of their crucial encounter with the Panthers of Gabon scheduled for Friday, January 14, in the ongoing African Cup of Nations (AFCON) in Cameroon.

Baffoe was addressing the Black Stars in a strong-encouraging message after the team’s training session on Thursday evening.

“You must show anger, anger to win, Aubameyang has recovered.”

“I don’t know if it’s Jonathan Mensah, Dziku or Daniel Amartey, I don’t care who is going to play at the Central defense.”

“From day one when you move out of the dressing room when you go into the tunnel, they must feel you. Not smiles, it’s no more joking.”

“Gabon is going to fall tomorrow.”

“I know what you are made of, in African Cups, that’s where you make your name.”

Ghana is set to play Gabon in their next Group C match at the Ahmadou Ahidjo Stadium in Yaoundé.

The Blackstars go into the game with Gabon having been defeated by Morocco in their first match, this is a make-or-break affair for the four-time African champions.

However, the Central African side is motivated by their open day 1-0 win over Comoros, they to sit top of Group C Table with Morocco with the same points.

Anthony Baffoe was the former Deputy General Secretary of the Confederation of African Football, (CAF) he is a business manager and former Blackstars player who capped 25 times between 1991 to 1994. 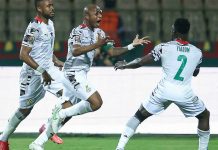 President Akufo-Addo cuts sod for construction of 12 storey maternity and...