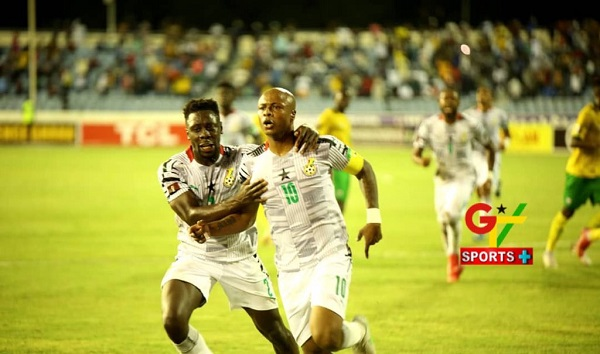 The Senior National team the Black Stars on Sunday, November 14, 2021, beat South Africa 1-0 at the Cape Coast to pick the sole ticket in Group G of the African FIFA World Cup Qatar 2022 qualifiers.

Captain of the team Andre Ayew who won his 100th Cap on the day, scored the only goal of the match in the 31st minute to give Ghana the edge over South Africa in the final group game. Ghana qualified ahead of Bafana Bafana on goals scored after the two teams were all tied on 13 points after six rounds of matches.

The Black Stars had to defend gallantly to protect the slim lead as Hugo Broos’ side mounted immense pressure in the closing stages of the game. Ajax’s midfielder Mohammed Kudus came off very early in the game and was replaced by St. Pauli midfielder Daniel Kofi Kyereh.

The only goal of the match came from the penalty spot after Daniel Amartey was fouled in the box. Captain Ayew expertly dispatched goalkeeper Rowen Williams to slot the ball at the bottom corner. South Africa came out from the break with the aim of equalizing the goal with the likes of Percy Tau shooting on target but Ghana’s goalkeeper Joseph Wollacott was on hand to make brilliant saves anytime the South Africans fired the salvo.

The Black Stars were able to hold on to the lead for victory that secured their qualification to the final phase of qualifying to the 2022 World Cup. The play offs will be in March 2022 after the 10 group winners are paired against each other. The five winners on home and away clashes qualify for the World Cup in Qatar.

Ghana’s Coach Milovan Rajevac who qualified the Black Stars to the 2010 World Cup is seeking to make another history with the Stars by qualifying them to another World Cup.

Ghana loses US$50 million through illegal fishing in 2017