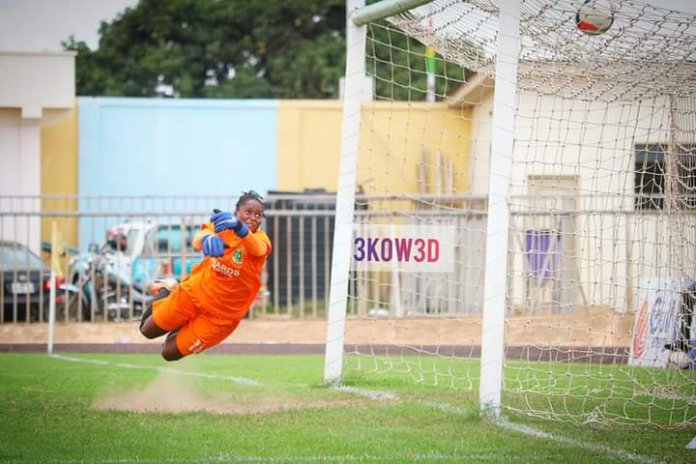 By: Akosua Adjei
Match day 15 of the Women’s League was honoured at various centres with Police Ladies taking on Army Ladies at the EL-Wak Sports Stadium.
The Derby game wrapped up match day 15 with Police winning 2-1 against debutants Army Ladies. In their first encounter on match day 6, Patience Adjetey’s goal for Army Ladies separated the sides at the McDan La Town Park.
Ahead of this encounter, both teams had similar results in their last five matches. Police had WDDLW while Army also WDDLW.
Ruth Appiah opened score from spot kick after Army Ladies fouled Deborah Afriyie in the 18 yard box.
The second was a well worked out goal between Jane Ayieyam and Juanita Aguadzie. Jane’s long pass to an unmarked Juanita on the right wings who calmly scored the belter to increase their lead to 2 in the first half.
Debutants Army Ladies tried as they may failed to find the back of the net. However lady-luck finally smiled on them as they got a consolation through Zainatu Alhassan.
Match week beckons but only for teams to fight against relegation as Hasaacas Ladies with 3 games to spare have been crowned champions of the Southern Zone. Meanwhile, the pressure is on in the Northern Zone between Ampem Darkoa and Dreamz Ladies for the top slot.
CLICK HERE FOR MORE SPORTS STORIES