The Management of Asante Kotoko S/C has promised to donate an amount of GH¢5, 000 for the upkeep of the victims of last Saturday’s (September 19,2020) accident, which claimed the lives of eight juvenile Ghanaian footballers.

The amount, according to the Management, is to help care for the injured who were receiving treatment at various hospitals in the Ashanti Region.

Eight colts’ players of the Africa Vision Soccer Academy perished in a fatal accident last Saturday on the Kumasi-Offinso road when the mini-bus on which they travelled plunged into the River Offin. 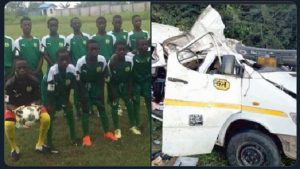 Twenty-eight (28) others on board the KIA van, including juvenile footballers and officials of the Academy, who sustained various degrees of injury were rushed to the hospital for treatment.

The players and officials were being sent to their base after a league registration exercise at Afrancho on the Kumasi-Offinso road.

“When the time is due for the final funeral rites for the departed young souls, Kotoko would again be around to offer the needed help,” Nana Yaw Amponsah, the Chief Executive Officer assured, at the unveiling of the Asante Kotoko new management, in Kumasi.

The ceremony observed a minute of silence for the departed souls.

The Kotoko CEO described the incident as unfortunate, saying the club would continue to be by the side of the bereaved families as they mourned their loved ones.

Raphael Dwamena career has suffered another major setback after his Danish Superligaen side Vejle Boldklub terminated his contract due to a recent heart problem. The...
Read more

Decathlon Ghana Limited has been unveiled as the official retail partner of the Ghana Football Association (GFA), for a period of four years. Per the...
Read more

Ghana midfielder Thomas Partey has been named the best player during Arsenal's 2-1 win against Rapid Vienna in the UEFA Europa League on Tuesday...
Read more

Notorious B.I.G. crown and Tupac love letters up for auction