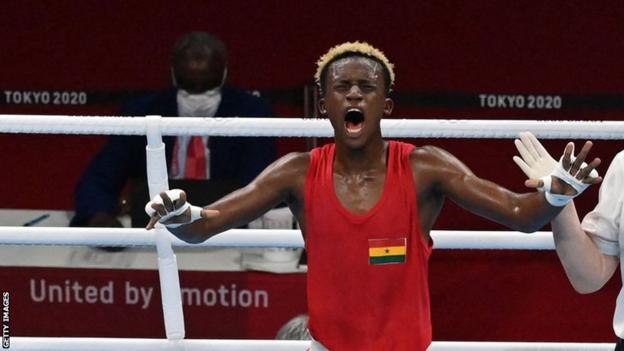 Samuel Takyi has won a boxing bronze medal at the Tokyo 2020 Olympics, Ghana’s first podium finish in 29 years, but his incredible Olympic journey came to an end in the semi-final at the hands of the USA’s Duke Ragan.

“The Golden Ring Warrior” has gone from unfancied selection on the Ghana team to featherweight podium glory, with more than 30 million people in his corner.

Up against a more experienced boxer in 23-year-old Ragan, Takyi once again left it all in the ring and pushed his opponent all the way, eventually losing out on a 4-1 split decision.

Takyi started strong, scoring on sharp jabs and using his height advantage, taking the first round 3-2.

But Round 2 went to Ragan, who was technically superior, then really turned it on early in the third, scoring with a bruising left-right combination and keeping Takyi from landing those rangy punches, working it inside.

The judges scored rounds two and three 4-1 meaning Duke will box for gold, while Takyi returns to Ghana a hero, bringing a bronze with him that represents Ghana’s first boxing medal since 1972 and their first in any sport since the football team won bronze at Barcelona ’92.

The 20-year-old Takyi defied all the odds at his debut Olympics, proving that there’s much more to come from this talented fighter.

He joins the pantheon of Ghanaian Olympic boxing greats Clement Quartey, a light welterweight who won silver in Rome 1960, Eddie Blay a bronze light welterweight medallist from Tokyo 1964 and Prince Amartey who made history in Munch 1972.

History made for #GHA!