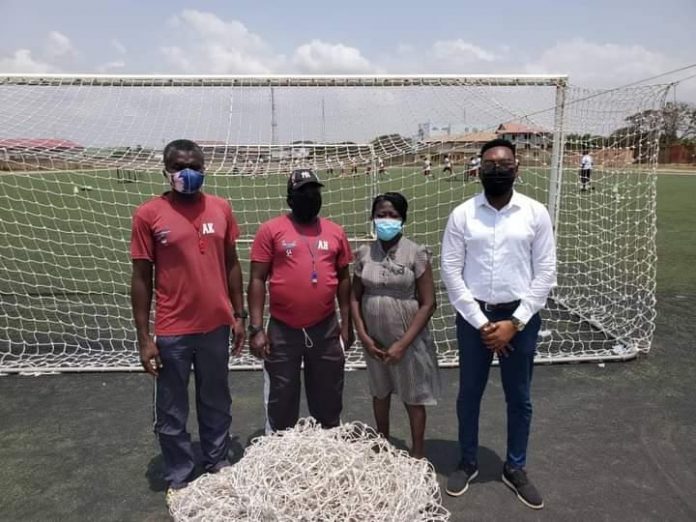 The Management of Tema United Football Club (FC) has donated a set of football nets worth GHC4,000.00 to the National Sports Authority (NSA) in Tema.
Assistant Coach of Tema United FC, Mr. Anthony Kwadwo Kwakwa explained that management of the club decided to purchase new football nets to replace the old ones which are worn out at the stadium.
He said this on Wednesday at Tema after the presentation that the team trained and played their home matches at the Tema Sports Stadium and would not watch for things to deteriorate completely so the need to support the facility.
He noted that several other clubs based in Tema who trained at the facility also help in one way or the other to make the facility attractive and conducive for training.
Mr. Kwakwa said there were plans to furnish the stadium with new chairs for the use of officials on match days.
He was in the company of Abudulai Haruna, Head Coach of the club, and Mr. Oscar Mawuli Nuwati, Head of Administration and Public Relations Officer of Tema United FC.
Secretary of NSA, Madam Rebecca Obu receiving the nets on behalf of the outfit expressed gratitude for the gesture towards the development of the facility.
Tema United FC was established in 2009 and registered under Division Two of the Ghana Premier League
Mr. Kwakwa noted that the club hopes to develop young enterprising talents who would earn placement in national and international clubs.
“Tema based players do well in the main league, so we want to train our players and see them get call ups into the premier league and national teams,” he said.