Former WAFA midfielder Majeed Ashimeru has expressed sadness over the elimination from the Ghana Premier League. The Sogakope-based team amassed 35 points after 34 matches winning 8, drawing 11 and losing 15 matches in the 2021-2022 season. The team which is known for talent development has groomed players such as Majeed Ashimeru, samuel Tetteh, Felix Annan and Razak Abalorah.

Majeed Ashimeru made his debut for the West Africa Football Club in 2016 against Liberty Professionals before moving to Austria to join RedBull Salzburg.

In an interview with Gloria Peprah and Alexis Laura Daniels on GTV Sports+’ Studio 5,
Majeed expressed worry over the club’s relegation but hoped the team would work hard to find their way back to the elite league.

Below is the Video; 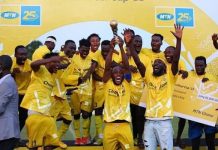